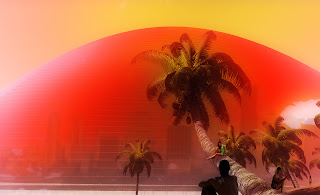 This is a competition entry for a new landmark at the Bayfront Park in Miami where the participants where asked to capture the soul of Miami as well as giving the city a fresh and innovative icon that would boost Miami's architectural legacy.

Background
Miami is located in the Sunshine State of Florida and is a city that is blessed with a tropical climate and great weather almost all year around, making it a major tourist destination and a popular place to retire.
The city of Miami that we know of today is a reclaimed city in many ways.
The land where most of the downtown area is, used to be a part of the Everglades wetland, but was drained to create land opportunities.
A major part of the city was also created by landfill with the dredging of Biscayne Bay. The majority of Miami Beach is mainly created in this way and this is also the case for the many islands that lies between Miami Beach and the downtown area, such as the port of Miami for example, which is the base for the enormous cruise ships that has their embarkation point from this area.
These ships are own little islands in themselves and Miami is the number one cruise port in the world.
The tradition of creating new spaces from water leads to a pretty unsentimental and interesting approach to landscaping as well as architecture.
The Bayfront Park which is the setting for this new proposed landmark was also created in this traditional way to free new spaces, in this case by setting up a retaining wall and pumping out sea water. 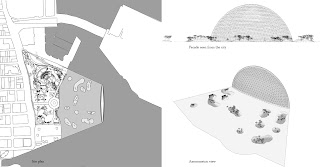 View from the harbor

The Idea
The new landmark is both a monument of the good life, as well as a landscape addition to enrich and counter balance the existing park with its already tropical landscaping.
The new monument is a thin, half sphere-shaped hotel with a casino on its lower floors and an observation deck on its upper floors, which gradually shifts its colors during the day, mimicking a dimmed sun at daytime and creating spectacular sunrises and blazing sunsets for the park at dusk and dawn. At night time it shifts to a moon.
The sun and the tropical archipelago will be a relaxed and positive monument that many people also can enjoy physically and that symbolize both the laid back way of the Miami lifestyle as well as the flamboyant decadence.
This tropical vista will attract many visitors, and the Bayfront Park will receive more people as a result, which is what this park lacks when there is not an event going on here. People will hopefully flock once again to the front porch of Miami to catch a relaxing tropical sunset or listening to house music and drinking coconut drinks on a small tropical island next to a huge moon. 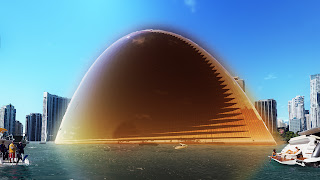 Daytime view from the Port of Miami 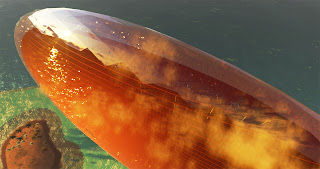 Aerial view of the building and the observation deck

The building and the water park
The building is reached by tender boats just like the nearby cruise ships has when they anchor in small harbours. This seclusion enhances the monumentality and the sun illusion and also heightens the exclusiveness of the hotel itself aswell as state its energy independence.
The sites close vicinity with the cruises makes this a great destination for cruise tourists that normally have a couple of days in Miami before sailing out on their Caribbean adventures.

The building is a grid shell structure with a glass facade that is coated with a film of transparent solar panels.
This is a new technique which is possible by letting the visible spectra of sun light straight through, and instead absorbing the high amount of ultravilolet and infrared light.
This energy is more than enough to power the building and the surplus goes to the stripes of mono-frequency lights that are integrated on the end of each floor slab and that points outwards to give a glow around the hotel and make the sun effect sharp and bright at dusk and dawn.
Mono-frequency lamps are powerful lights that produce light with a narrow frequency that makes colors other than black and the chosen color invisible.
This makes the surrounding tinted with that specific color and creates an enchanted atmosphere around the building.
At daytime the lamps will be slightly dimmed just to create a shimmering and reflective effect.
At night it glows milky white like a moon. 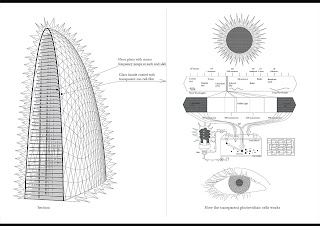 The water park between the existing park and the new hotel is made up by a large shallow pool that surrounds a small archipelago with landscaped small sand islands with palm trees on them.
The sand is taken from different popular beaches around the Caribbean so you can sample the best sand from Miami’s neighbours without leaving the city.
The pools are only waist deep so you can wade to the islands and also use the whole premise as a spectacular arena for the Ultra Music Festival and other venues.
The pool could also be completely dried out if needed for any special type of event.
Upplagd av visiondivision kl. 5:02 PM

Valuable info. Fortunate me I discovered your web site accidentally, and I am stunned why this accident didn't came about earlier! I bookmarked it.