2007-11-01
Second Prize in a bridge competition.
The VD crew extended the program with a modernistic mega-block for birds as railings.
For more details and in-depth coverage click on to http://www.visiondivision.com 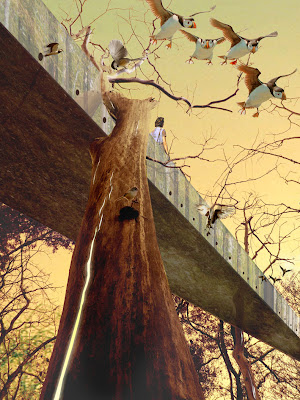 The site is located in a beautiful untouched forest with old leaf trees in a small rift with a stream at the bottom.
This patch of forest lies between The Botanical Gardens and Sahlgrenska, the major hospital in Gothenburg.
The hospital wants to link to the peaceful environments of the botanical gardens with two pedestrian bridges.
The rift is the setting for one of these bridges that will have the longest span and it is also dealing with a more delicate environment.
This calls for a sensitive solution, both in appearance and production.

Fallen trees lie on the ground here and there like it usually does in a natural forest.

We erect these fallen heroes that were left for oblivion, and let them be the proud pillars for the bridge through the forest where they once used to grow.
Because why should we cut down other trees from another forest and transport them to the site when we have these resources here?

The bridge will appear as a white hovering line made in plexiglass that slightly reflects the beautiful landscape, which is carried by the tree pillars that disappears in the surrounding nature.
At night time, the truth of this bridge reveals itself.
Welcome to bird city! 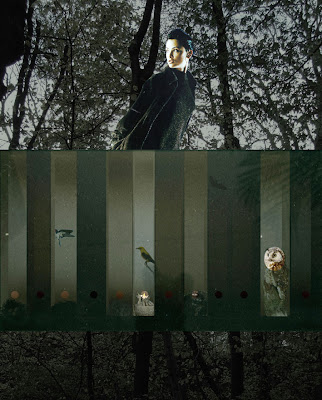 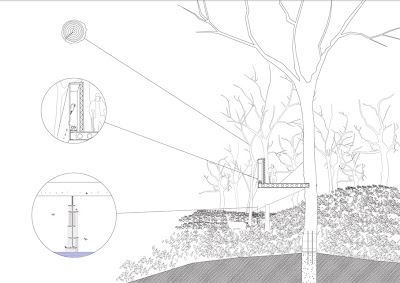 2007-07-01
Visiondivision helps a client to escape the oppression from the local regulations by building a Secret Sauna.
Feautured at http://www.archidose.org/, http://www.mimoa.eu/, http://www.mocoloco.com/, http://www.monogocoro.jp/ to mention a few. 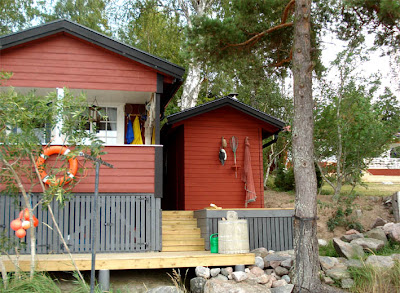 If you want to build something in Sweden, you have to neglect your architectural aspirations and desires, and build something comprehensible and conventional to please the Swedish building regulations. 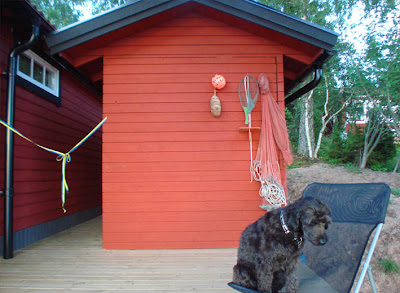 So at a first glance this sauna may appear to be an anonymous wooden cabin, with no architectural features or ambition. The front façade is windowless; a water proof drape covers the façade on the other side. The sauna has a pointed traditional roof as well, to accomplish this intriguing scam. 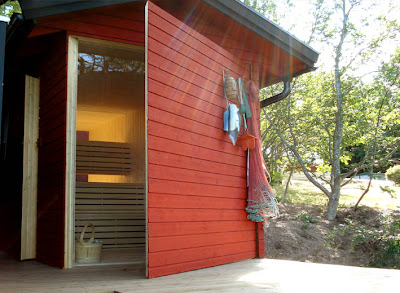 The front façade is actually a door, and when it is opened, the cabin changes its appearance completely. 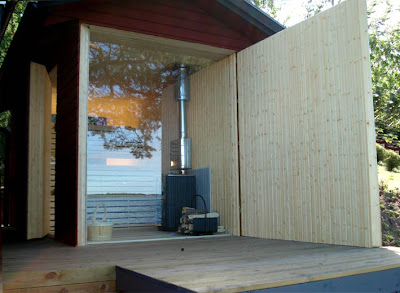 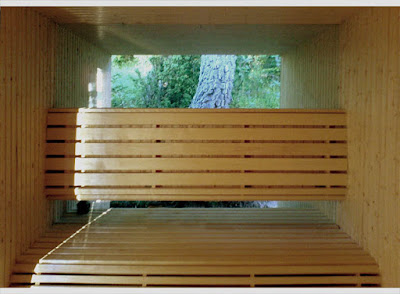 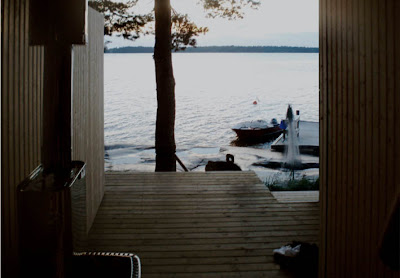 Now you have a magnificent view over the archipelago, and the door/wall creates an intimate space with the guest hut next to the sauna. The wall prevents the neighbours from peaking in as well. 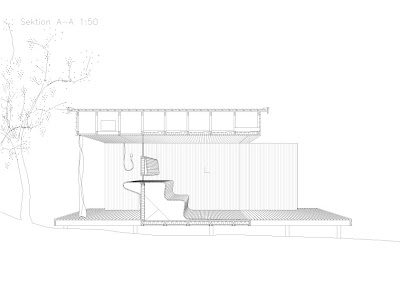 The VD Guide - part I

Waw an Namus is an exotic volcano deep in the desert of Libya. A low caldera about 4 km in diameter is surrounded by a 5 - 10 km wide dark black deposit of ash that stands out starkly against the yellowish desert. The few people who have visited have been struck by its beauty: The Italian geologist Angelo Pesce wrote that as seen from the rim, one is "overwhelmed by a scene of rare beauty....Inside, the only thing one wishess is to be alone and wander in admiration from one end to the other."

Lalibela was intended to be a New Jerusalem in response to the capture of Jerusalem by Muslims, and many of its historic buildings take their name and layout from buildings in Jerusalem.This rural town is known around the world for its monolithic churches which play an important part in the history of rock-cut architecture.

The Korowai live together in small family groups in treehouses. These treehouses can reach heights up to 50 meters but only if there is a disput with the neighbours, or if they live in an hostile area. Their normal treehouses are around 6 to 25 Meters high. A Korowai family with up to eight persons live in such kind of houses. But there is a strictly separatism between men and women.

An earthquake shook the western edge of Sicily in the Belice river valley. Gibellina was among twelve towns completely destroyed, though rebuilding happened differently here than in other towns. Instead of building atop the ruins of the old town the Gibellina was built approximately 20 km away, near a train line and highway. In 1981 Burri visited Gibellina, proposing the massive Cretto over the ruins of the old town.

The Communist headquarters by Oscar Niemeyer can be visited by appointment via e-mail message to Vincent Benoit at vbenoit@pcf.fr or by calling him at (33-1) 40.40.12.12

Burning Man is an eight-day-long annual festival that takes place in Black Rock City, a temporary city on the playa of the Black Rock Desert in Nevada, 90 miles (150 km) north-northeast of Reno, ending on the American Labor Day holiday in September. The event is described by organizers as an experiment in community, radical self-expression, and radical self-reliance[1] and takes its name from the ritual of burning a large wooden sculpture of a man on the sixth day.

550 kilometers from Manila, rises a near perfect cone volcano; the famous Mayon Volcano. Its symmetrical form at any horizontal direction makes this volcano a truly scenic wonder.

The Giza Necropolis stands on the Giza Plateau, on the outskirts of Cairo, Egypt. This complex of ancient monuments is located some eight kilometres inland into the desert from the old town of Giza on the Nile, some 25 kilometres southwest of Cairo city centre. The pyramids are the only remaining monuments of the Seven Wonders of the Ancient World.

Hot springs with a high level of minerals leaves thick white layers of limestone and travertine cascading down the mountain slope resembling a frozen waterfall. One form of these formations consists of crescent-shaped travertine terraces with a shallow layer of water, lying in a step-like arrangement down the upper one-third of the slope, with the steps ranging from 1m to 6 m in height. The other form consists of stalactites, propping up and connecting these terraces. Pamukkale means "Cotton Castle" in turkish.

E.A.T.'s ambition was to create a laboratory environment, encouraging ‹live programming› that offered opportunity for experimentation, rather than resort to fixed or ‹dead programming›, typical of most exposition pavilions. The Pavilion‘s interior dome –immersing viewers in three-dimensional real images generated by mirror reflections, as well as spatialized electronic music–invited the spectator to individually and collectively participate in the experience.The pavilion also emits thick vapour, three decades before the blur-building.

Birth: A Long time ago
Location: Around the polar zones
Architect: The solar wind

Auroras are natural colored light displays, which are usually observed in the night sky, particularly in the polar zone.Auroras are now known to be caused by the collision of charged particles (ions (+) (-) ) found in the magnetosphere, with atoms in the Earth's upper atmosphere (at altitudes above 80 km). These particles travel into space with speeds of 300 to 1200 kilometers per second. A cloud of these particles is called plasma, and a stream of plasma coming from the sun is called solar wind.

"Then, a golden mystery upheaved itself on the horizon, a beautiful winking wonder that blazed in the sun, of a shape that was neither Muslim dome nor Hindu temple-spire. It stood upon a green knoll, and below it were lines of warehouses, sheds, and mills. Under what new god, thought I, are we irrepressible English sitting now?"Rudyard Kipling

Mount Tindaya is located on Fuerteventura in the Canary Islands. It was chosen by artist Eduardo Chillida, after a long and exhaustive search, as the location for a large-scale sculpture, a carved space of roughly cubic proportions (50m per side) inside the mountain that would be capped by two skylights.The three-phase project (I-feasibility, II-drilling, III-construction) is expected to be completed in 2010

This little resort area in sanzhai was build by local contractors commissioned by the government, but a series of work related accidents left people dead, and pretty soon the whole country considered it haunted. now its abandoned, but they won't demolish it because destroying the home of spirits is serious taboo.