Chop Stick is branded and open to the public 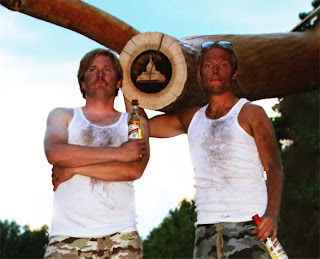 After a year of bravery overseas in the heartland of the United States of America, Chop Stick was finally branded and opened to the public this Saturday. From now on the visitors at the Indianapolis Museum of Art's 100 Acres art park can buy beer and lighter snacks from the kiosk or just swing under the majestic trunk. More pictures from this masterpiece is coming soon, for now all we can show you is Sweden's most hard working and proud architects in front of their newly branded building.
Upplagd av visiondivision kl. 7:08 AM 0 kommentarer 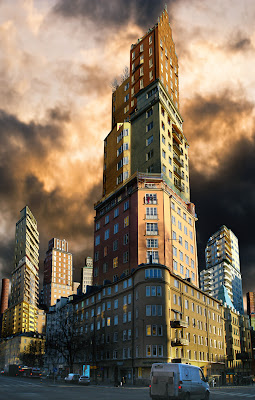 Visiondivision has investigated the possibilities of a densification of inner Stockholm to solve the great lack of housing that the city suffers from.
Watch the movie above in full screen and read all about the proposal below. If the movie doesn't work we have a low-res version at the end of this post.

Stockholm is one of the fastest growing cities in Europe at the moment, but the pace of new constructions of housing is not at all in tune with the current demand. The result of this unwillingness to build has already begun to show its face on many levels.
One consequence of this is that Stockholm are turning out to be a more segregated city than before, where the people that can afford the expensive apartments in the inner city moves in and the people that hasn’t the income that is necessary is forced to move to the peripheral suburbs.
This lack of ambitions from the city will also lead to a loss of a lot of potential growth if nothing is done.
Who wants to move to a city where it is impossible to get an apartment? Which companies wants to invest in a city where their employees may have a hard time to find a place to stay? Which exchange students wants to study in a city where all the free time available will go to find a small flat with a decent rent?
Instead of building in the outskirts of the city we propose to build where most people actually wants to live.
We propose a new way of looking at the city, which at a first glance from the street looks already complete and finished, but that actually hides over hundreds of new potential sites in the inner city.

Stockholm consists chiefly of blocks with inner courtyards, yards that in our opinion are not used to their full potential, and it is here that the solution lies.
We simply propose that we change the planning regulations for the courtyards to allow a no limit height experimentation that will be able to solve the dire lack of housing that Stockholm faces.
There are roughly three different types of courtyards which this new free zone can be applied to; the empty yards that are ample enough, the ones with buildings in good condition that can be built upon and court yards with houses in bad conditions that can be replaced by much higher buildings.
The existing buildings that are facing the streets are kept as they are and the new court yard buildings will have typical Stockholm facades, sampling the surrounding areas architecture.
A dense city is good for the environment and this type of development also takes away the pressure on the important green areas that are open for all.
The new houses can benefit the surrounding tenants; for example a garage, a gym and a roof top terrace.
Developing a part of the court yard also means that the tenants/owners could make a profit or get lower rents.
People most affected by the new development could also get a first pick in one of the new apartments in the yard buildings.
With a larger density of people also comes a wider range of things to do.
More museums, libraries, restaurants, bars, cafés, places where people can meet.
The result will be a better Stockholm for everyone; a Stockholm Stacked.