Visiondivision gets the commission to design a hotel in Taganga, Colombia. 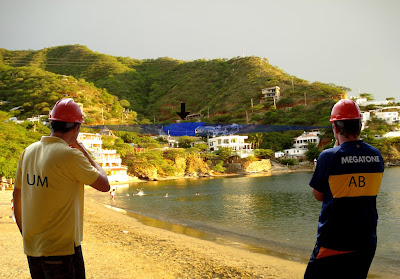 Taganga is a small fishing village set in a deep, beautiful bay on the Carribean coast in Colombia.
Except for fishing, tourism is a growing industry, attracting mainly backpackers from all over the world to relax and hangout in this tranquil environment.
50% of the workforce of Visiondivision was on a vacation to this enchanting place and ended up at a hotel called “Techos Azules” meaning “The Blue Roofs”, having its origin in the blue painted roofs of this cozy hotel, resembling a Greek hacienda of some sort.
After a casual talk with the owner it turned out that he wanted to expand his business with a new hotel on a site just behind the old one.
So we got a client on our vacation.

The site is rather steep, sloping down from a quite busy road down to the existing hotel.
The new hotel was also going to be called “Techos Azules”, making the concept of the plot quite easy. Following the Greek theme ,we decided to mimic a small intimate Greek village in different levels with a big hangout terrace; consisting of all the roofs of the hotelrooms and also down to a pool in different levels. 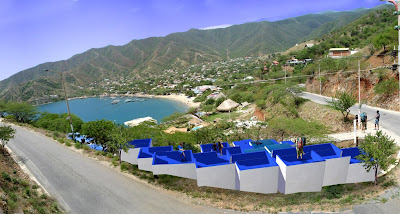 The terraces are all painted blue, making the experience soothing and relaxing and also following the obvious theme of the old hotel of course.
Infinite pool is yesterday's news, we wanted to create an infinite hotel. 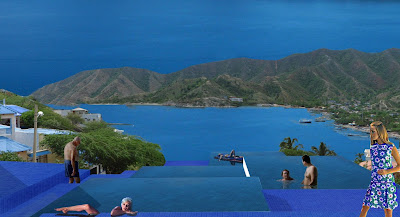 If you see the hotel from the road it is all modern white with glass doors, making the blue surprise even more delightful. 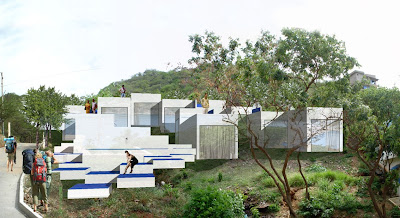 Every room gets ocean view except one lucky guest that will get a pool view. 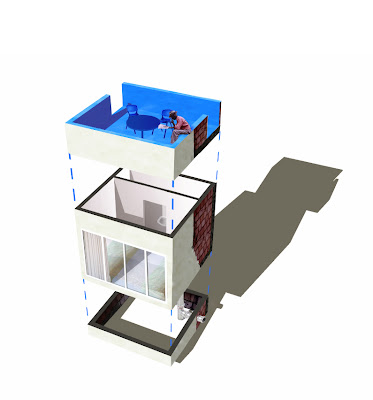 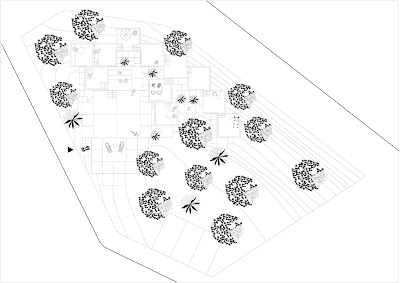 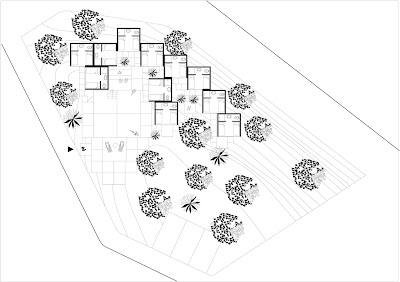 Check out some old classical VD projects like Rolling Culture, Stay, Big Bear, Noble Savage and a lot more sweet gems of architecture.
Just click on the archive of 2007 and they will pop up just for you.
Upplagd av visiondivision kl. 1:31 AM 0 kommentarer

Catedral Metropolitana do Rio de Janeiro is the seat of the cardinal archbishop of Rio de Janeiro, Brazil. It is dedicated to Saint Sebastian, the patron saint of Rio de Janeiro. The current church was built between 1964 and 1979 and replaced a series of old churches that had served as cathedrals since 1676. It is located in the centre of the city. Conical in form and with a 96 metres internal diameter and an overall height of 75 metres, it has a standing-room capacity of 20,000 people.
The cathedral's four rectilinear stained glass windows soar 64 metres from floor to ceiling.

Sossusvlei -Namibia dessert with the highest dunes in the world-
Birth: A long time ago
Location: Namibia
Architect: Wind and Ocean

Some of the spectacular hills of sand are, at a height of 300 metres, the highest in the world.

La defense -An office building with a magic courtyard -

The exterior façade reflects the larger urban condition, while the interior façades of the courtyards have been designed with the office tenants in mind. These façades are clad with glass panels in which a multi- colored foil is integrated and, depending on the time of day and the angle of incidence, a variety of different colours are reflected, animating the courtyards

As part of their campaign to unify the German people behind Nazi ideals, Hitler enouraged his architects, especially Albert Speer, to create places for Germans to have what he termed "mass experiences." To do this, they created assembly halls, stadia, and assembly grounds where thousands could gather to display their patriotism and be edified by the speeches of party leaders. The most significant of these places was the Zeppelin Field at Nuremburg, where the Nazi Party held annual rallies celebrating the anniversaries of its formation in 1920 and the 1923 Beer Hall Putsch. The Zeppelintribune was the centerpiece of the Nuremburg party monuments. It incorporated classical elements, but modified them to emphasize line, cleanliness, and order. From this building, Hitler and other party leaders gave speeches to assemblies of tens of thousands of germans. The most effective part of this assembly grounds was not the building, but the light. Speer surrounded the assembly area with hundreds of spotlights pointed skywards. The effect was to create a "cathedral of light," a Lichtdom, and its impact was tremendous.

Ronchamp is a pilgrimage chapel, though on most days more frequented by architectural pilgrims than the intended variety. Situated on a hill above the village of Ronchamp, it is the latest of a long history of chapels on the site. Its predecessor was destroyed in fighting in the Second World War, though much of its stone is used in the walls of Le Corbusier's building.
The thick, curved walls - especially the buttress-shaped south wall - and the vast shell of the concrete roof give the building a massive, sculptural form. Small, brightly painted and apparently irregular windows punched in these thick walls give a dim but exciting light within the cool building, enhanced by further indirect light coming down the three light towers.

The Salar de Uyuni, a sea of salt, a salt desert, in southwestern Bolivia, was once an inland sea, or giantsalt water lake, but the water vanished into the thin dry air of Andean altitude. All that remains is the salt, tens of meters thick, lying stark beneath bright sky: a sun-bleached skeleton of a dead sea.

The Sacred Mosque of Mecca -The holiest place on earth for the muslims-
Birth: 638 A.D

Architect: Various angels according to Islam

The Sacred Mosque, is the largest mosque in the world. Located in the city of Mecca, it surrounds the Kaaba, the place which Muslims turn towards while offering daily prayers and is considered to be the holiest place on Earth by Muslims. The current structure covers an area of 356,800 square meters including the outdoor and indoor praying spaces and can accommodate up to 4 million worshippers during the Hajj period.Islamic tradition holds that the mosque was first built by the angels before the creation of mankind. The Black Stone is situated near the eastern corner of the Kaaba, and according to some people is believed to have 'fallen from heaven' and turned black due to man's misdeeds.

The Chocolate Hills is an unusual geological formation in Bohol, Philippines. It is composed of around 1,268 perfectly cone-shaped hills of about the same size, spread over an area of more than 50 square kilometres. They are covered in green grass that turns brown during the dry season, hence the name.

The waterfall system consists of 275 falls along 2.7 kilometres of the Iguazu River. Some of the individual falls are up to 82 metres in height, though the majority are about 64 metres. The Garganta del Diablo, a U-shaped 150-metre-wide and 700-metre-long cliff, is the most impressive of all, and marks the border between Argentina and Brazil. At one point a person can stand and be surrounded by 260 degrees of waterfalls. The Garganta do Diabo has water pouring into it from three sides.

They were known as the eighth wonder of the world - glistening pink and white terraces of silica, created by the warmth from the centre of the earth.Cascading into the remote Lake Rotomahana, people from all over the world travelled by steam ship, then horse and cart, a two-hour canoe journey and finally on foot to see nature’s masterpiece.In 1886, the terraces were destroyed when Mt Tarawera erupted, devastating most of the surrounding landscape, and killing more than 150 people.