The team is now back in the US where they have set up a temporary office to refine the last details of Chop Stick which is scheduled to be open for public next summer.
As always you can reach them on their e-mail which they check on a daily basis. 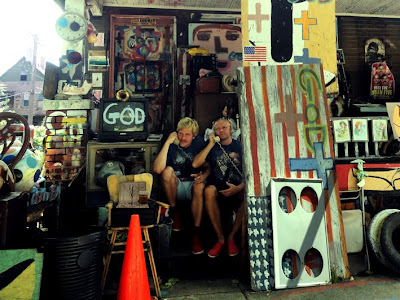 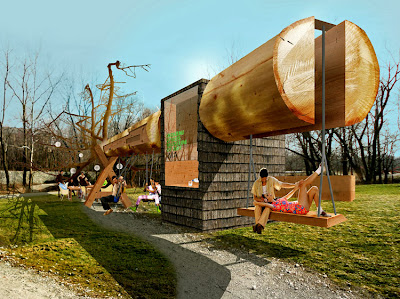 Visiondivision was commissioned by the Indianapolis Museum of Art to create an innovative concession stand for 100 Acres: The Virginia B. Fairbanks Art & Nature Park, which will begin construction this summer.

The raw material we selected is a 100-foot yellow poplar tree, the state tree of Indiana, known for its beauty, respectable size, and good properties as hardwood. We found a great specimen standing in a patch of forest outside of Anderson, Indiana. Our goal is to make the best out of this specific poplar tree, from taking it down and through the whole process of transforming it into a useful building that will be part of one of the finest art parks in the United States. As the project proceeds, we continue to be surprised by all of the magical features that are revealed in refining a tree into a building; both in the level of craftsmanship and knowledge of woodworkers and arborists, and also of the tree itself. 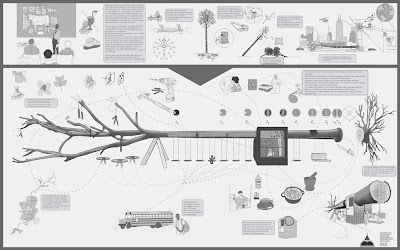 The first step is to cut down the tree, which is done when the ground is dry enough to manage a crane on the site, with special mats placed on the ground to secure the crane’s operation. A cushion of small, already chopped-down trees is created to reduce the impact of the tree’s fall and to keep the majority of its limbs intact.

The tree is then transported to the park site, where it becomes the suspended horizontal beam of this new structure, which will be almost entirely made out of the tree itself. The tree’s bark is removed to prevent it from falling on bystanders, a process that occurs naturally as the moisture content in the wood drops, causing the tree to shrink and the bark to lose its grip. Craftsmen loosen entire cylinders of bark from the trunk that are then flattened and cut into a standard shingle length. The shingles are carefully stacked and placed under pressure to avoid curling. The stacks are then kiln dried to the proper moisture content, sterilized, and kept in climate-controlled storage until they are ready for use. Bark shingles are very durable, long lasting (up to 80 years), and maintenance free.

After debarking, pieces of wood are extracted from the suspended tree and used for each of the components of the concession stand; structural support of the entire construction, pillars and studs for the kiosk, swings under the tree for kids, benches and tables to be placed under the tree’s crown, from which special fixtures made out of branches will hang. Many school children visit 100 Acres, and we had those kids in mind when we decided to hang swings from the tree.

On a smaller scale, we are exploring ways to use other parts of the tree in the concession stand, including its root system, which is separated from the tree when cut down. The roots have many edible features, such as root bark used to make tea and tonics that could be sold in the kiosk, for example. Pressed leaves and flowers taken from the tree will be ornaments in the front glass of the kiosk. There is also the possibility of extracting honey from poplar tree flowers, which could be something for sale on site. The branches that are less than five inches in diameter are cut away to prevent eventual rotting, and those can be used for details such as legs for the chairs and tables, or grinded down into sawdust for use as insulation. 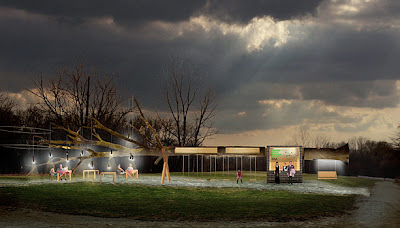 The cut down of the tree and the transportation to the IMA
(Image courtesy: Donna Sink)

Here is a series of pictures from the two intense days in Indy this summer when the tree was taken down gently from a forest outside of Anderson, Indiana and taken to the 100 Acres: The Virginia B. Fairbanks Art & Nature Park at The Indianapolis Museum of Arts. 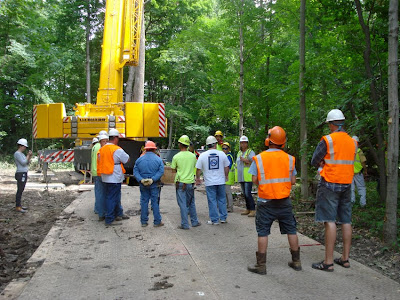 The fine craftsmen of Indiana conferencing before the chop down 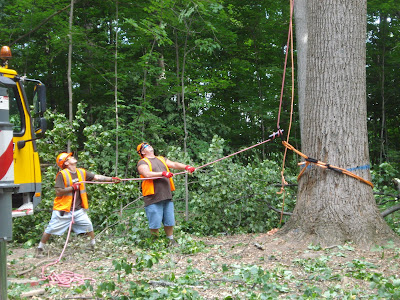 Connecting the wires to the crane, and choping down smaller limbs 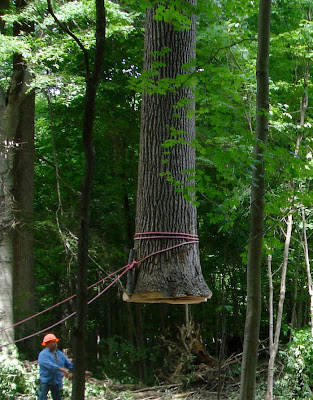 The yellow poplar tree hanging from the crane the tree in a horizontal position 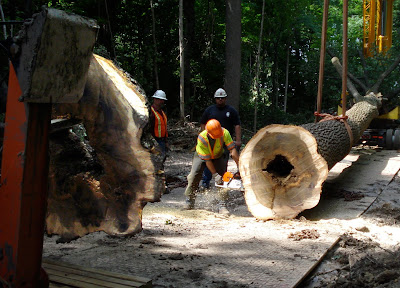 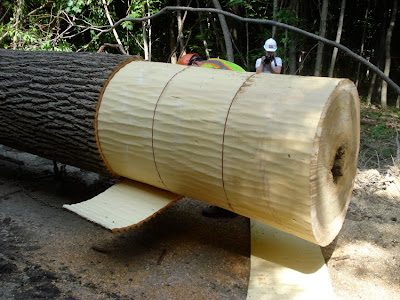 A first debarking of the tree to fit the truck 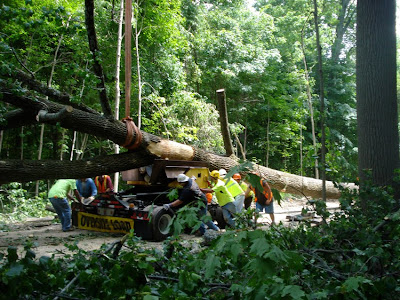 Getting the tree on the back part of the truck 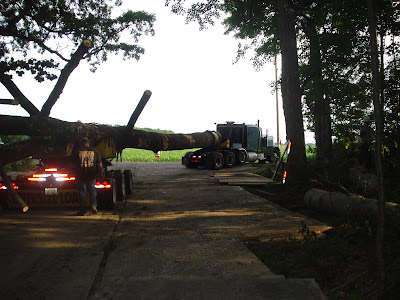 The truck is finally loaded 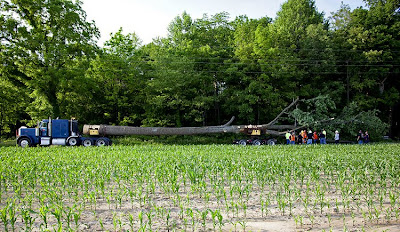 The tree outside Anderson, Indiana, ready to roll 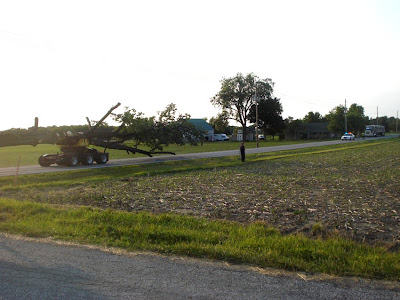 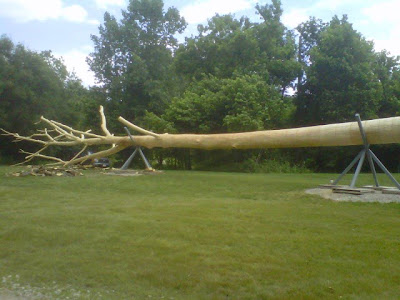 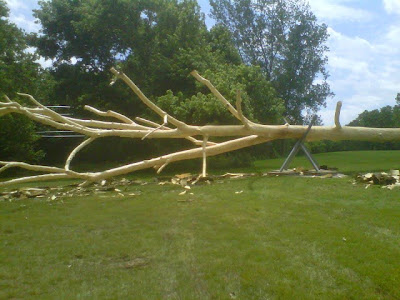 The crown of the debarked tree at the 100 acres ready for further refinement.

A huge thanks to our collaborators!

A new competition is out that we're thinking of entering.
The announcement seems promising. 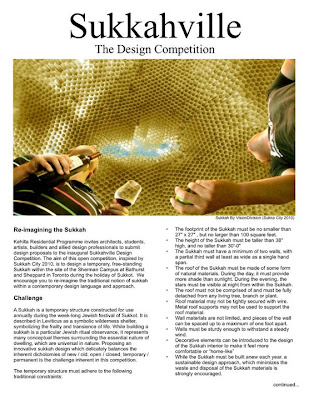 Cancer City on display at the Tallinn Architecture Biennale

Our knock out project Cancer City will be on display at the splendorous Kadriorg Palace during the ambitious Tallinn Architecture Biennale which will be held September 8-11 2011.
Tallinn Architecture Biennale is a new architecture forum that brings together theory and practice, young and experienced architects in order to arouse rich discussion over architecture, urban planning and landscape issues.
We are so happy to be a part of it that we will personally transport a model across the Baltic Sea to secure the fragile conveyance. 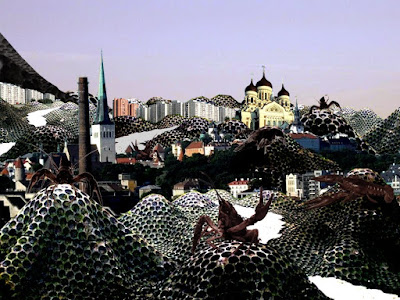