This project is a part of a bigger commission to improve several power plants for an energy company. 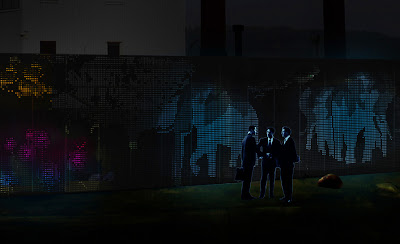 In this first stage we we’re appointed to create a storage facility for various industrial pipes but foremost for several heating containers that with a short notice should be able to be outsourced around the city as back-up power during blackouts. The containers are quite big and are lifted from the storage with a special crane truck, making a roof impossible. Additional future containers should also be considered in the scheme, which called for a shelter with the flexibility of an anaconda stomach.
The surrounding area is industrial and quite rough and the company has had some problems with break in and vandalizing which also had to be taken into account. But the major issue was the fact that the present depot looked miserable and they wanted a neat looking package to encapsulate their bits and pieces.
So we made a good looking, roofless, safe and flexible-as-an-anaconda building.
The part of the structure that faces the surrounding is slightly higher and rigid and is also functioning as a wall to the premise. The inner part is not so high because these wall systems should be able to be altered and movable.
We made three modes with different area sizes with the help of pre-made holes in the ground which the walls on the flexible part of the structure could switch between when necessary. Some wall segments are also gates. 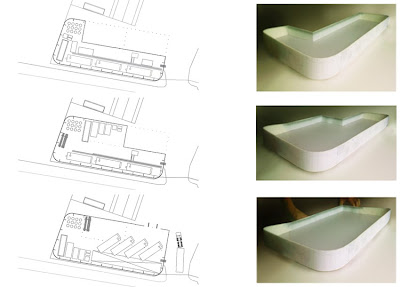 Plans of the different modes
The whole façade is made out of perforated steel plates.
The inner part of the structure is perforated in a mathematical and repetitive fashion to minimize wind loads, permit views into the storage without experience the clutter.
On the rigid part that is facing the surroundings, we perforated a grand motive with a story that is weaving in the energy company, the city and different world natures into a surrealistic “total nature”. This nature is actually also a disguise.
Different building details and devices are hidden in the motive; the main door for example is disguised in a forest, with the keyhole in one eye of a bear. Various surveillance cameras are hidden behind different creatures; for example behind the watchful eyes of a tiger in a mountainous setting, in the deep gaze of the founder of the city, Karl IX, in the bewildered look of a picnic lady from the great Swedish painter Carl Larsson.
From the savanna motive, water taps are inserted in the end of elephant trunks, to clean the façade if necessary.
A rainwater collector from the inside of the storage leaps out through a pipe that makes the horse of King IX urinate. To gentle the smell of the containers somewhat, we put canisters of air fresheners amid some butterflies and flowers in the painting. 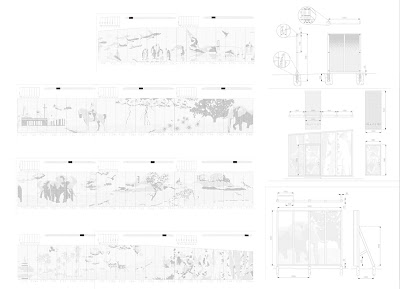 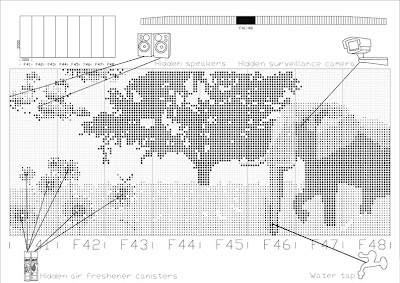 Detail drawings
The motive is quite vast but during daytime the façade will hardly be visible unless you stand close to it, making it neat, white and clean. As the sun sets however, the colored lights that lit up selected parts of the motive will transform the building into a huge glowing painting, giving the passing cars on the nearby highway some inspiration along the way and the pedestrians a wondrous object in the anonymous and harsh industrial surroundings.
The project is still under evaluation, we will let you know when we have more information. 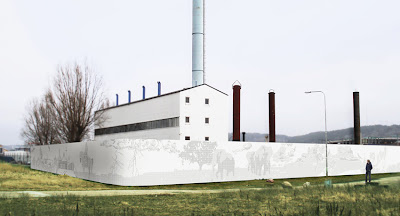 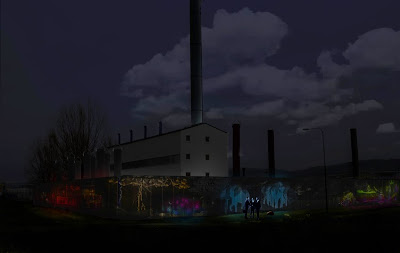 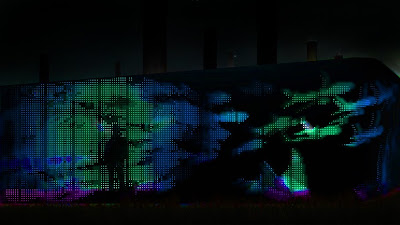 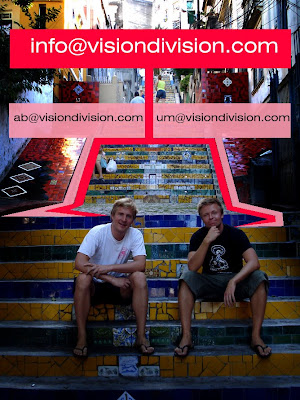 visiondivision went to the jungle of Thailand to meet one of their clients; a young man called Pete. After a quick observation of his present home and village to gain a deeper understanding for our new design, we had a business dinner and agreed to become his architects. He smiled at us and said that he had great expectations of the outcome.

Construction starts next week, and we hope that he won't be disappointed.