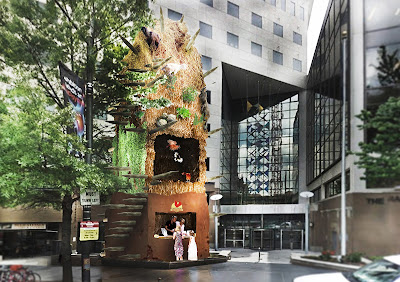 Visiondivision was invited by the Esther Klein Gallery in Philadelphia to make a proposal for the exhibition The Usable Earth, where the firm was asked to explore the role of ecology in society. The exhibition will open in Philadelphia on June 12, 2015 and run through July 24 and is curated by Kristen Neville Taylor.

We proposed a temporary structure to be erected in front of the Esther Klein Gallery, a structure that is truly unique and an eccentric fusion of a miniature farm and a café,
stacked as a pile of hay that is impaled on wooden poles that holds up the structure.
Goats, hens and crops lives and grows at different levels of the structure and the café/kiosk is integrated at the base and will have a breakfast menu based on the products of the mini-farm; goat milk, cheese, eggs and vegetables, making the dishes perhaps the most locally produced food that has ever existed in a big city.
Haybales are placed around the small plaza where people can sit and eat omelet or just watch the goats climb and eat from the structure accompanied by the clucking melodies from the hens.
The Hay Stack Cafe will be a true clash in the city landscape, a slice of another time, place and nature.
A miniature world in itself, a stacked ecosystem.

Structure
1. Wooden poles are driven into the ground as the primary structure.
Hay are then impaled on the poles to a certain level, becoming the secondary structure. This is a traditional method to dry hay.
2. Stabilizing rafters are then connected with the primary poles. Horizontal joists are placed as a mezzanine floor for the hen coop.
3. More hay is then added. More stabilizing rafters and a second floor are added for the goats.
4. More poles are driven into the hay for stairs and for planting crops.
5. The structure is refined further with a clay plaster on the kiosk level, and excavation of hay for the kiosk and for the animals.
Each and every material will be something that is found locally. The hay can be taken from a local farm, the mud for the plaster from amlocal river, the wooden poles from a lumber mill close by and so on. 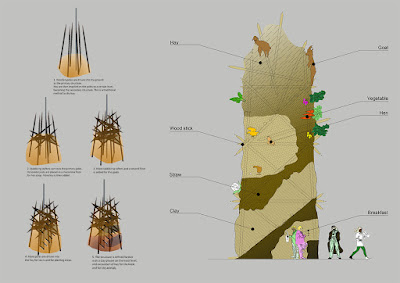 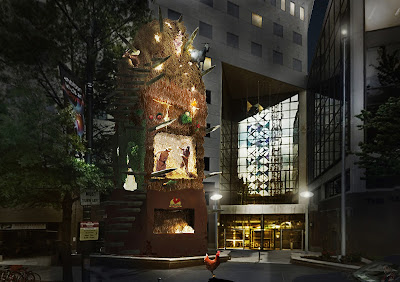