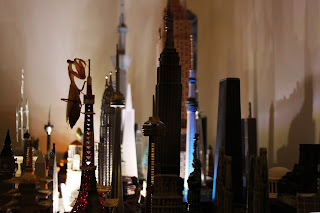 A close friend to the firm got a praying mantis for his birthday.
The praying mantis is a quite bestial creature that devours its prey very slowly, holding its catch firmly with its spiked forelegs while gradually working its way through the body of the still alive critter.
The primary prey of a mantis consists of animals not so much smaller in size from the mantis itself, ranging from crickets to small birds and frogs.
The mating is also a cruel affair regularly ending up with the female biting off the male’s head during the act.

The new owner of this fascinating pet wanted help to create a habitat that could suit this mini-monster.
Our friend also wanted an enclosure that would look good in his livingroom.

Being an architect at visiondivision means that you travel a lot. Both to meet clients all around the world as well as getting inspiration to produce heroic first-hand architecture.
A couple of years ago we began to collect souvenir buildings from places we’ve been to, resulting in a quite impressive collection of an all-star team of miniature landmarks.
When we then got asked to help out with the new mantis home, we quickly come to the conclusion that a monster needs an inspiring and iconic domain to fully reach its monster potential.
King Kong had a suitable match in Manhattan and Godzilla had Tokyo as its playground.
So the miniature monster got a miniature metropolis to evoke fear and agony in, without any superhero that stands in its way. 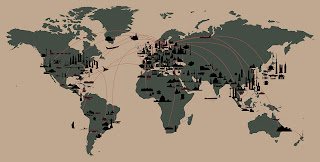 Map showing where some of the souvenir buildings was collected. 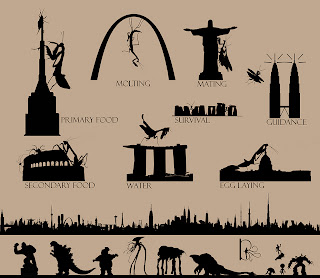 The Souvenir CIty comes with a great geometric variety that the praying mantis can make use of in its life.

The Souvenir City provides a variety of geometric forms and materials that suits the different needs and the different events that occurs in the life of a praying mantis. After a couple of weeks of studies, we saw a behavior pattern and that the praying mantis had found some favorite spots in the city already.

Food
The Praying Mantis will be fed mostly with crickets, which have a tendency to climb to the highest points in the city, making it an easy target for the mantis when luring around the spire of the Empire State Building for example.
Sometimes the Mantis will also be fed with bugs found in the client’s house and garden, like spiders and such, which have other hiding techniques than the crickets but still highly attractive as food for the mantis.
These prefer to hide in souvenir buildings with cavities, like the Coliseum and the Pantheon or buildings with dramatic shapes like the Casa da Musica or the CCTV building.

Water
The souvenir buildings where water has a central role, will also have real water in or around them, so the Praying Mantis can drink.
These include the Panama Canal, the Marina Sands Bay Hotel and the Fontana di Trevi for example, as well as many of the souvenir bridges that can be found around the city.

Molting
The Praying Mantis sheds its skin many times during their lifespan, and to do this they need a geometry like the St Louis Arch which suits this aspect perfectly.

Guidance
Many mantis males fly during the night to avoid getting caught by birds and to find less-mobile females to mate.
Some of the souvenir buildings have artificial lights that makes their nocturnal travels easier and that also have the advantage that the light attracts their prey so they can have a night snack.

Mating
The sexual cannibalism that occurs during the mating act is a well-studied, but not completely understood behavior. The male have a much better chance to survive when dismounting the female (this is when the risk of getting eaten is the highest) at the Empire State Building than he would at the Pentagon for example, because of the greater chance for the female to catch a prey at the New York skyscraper than the flat and low lying Washington landmark which hardly sees any critters.

Egg Laying
The female lays between 10 and 400 eggs, depending on the species.
The eggs are capsuled in an egg mass called ootheca and often attached on a rather flat surface, like the just mentioned Pentagon or the St Peter’s square which portico makes a nice protective frame to the ootheca.

The Hatchlings
Apart from the many great landmarks, the Souvenir City also consists of many small souvenir buildings as well, a majority being touristy ceramic cottages from different parts of Europe. These enclaves of smaller conurbations with its many alleys makes a perfect hideout for the baby mantis when they are hatched, so they won’t get eaten right away by their parents. Here they will also find smaller prey that suits the size of their appetite just right.

So now there is a small city in our friend's livingroom, with its own little monster in it. 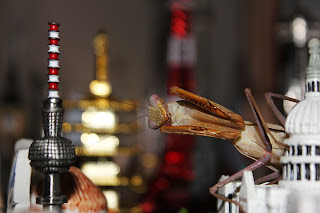 The praying mantis at the US Capitol Building where she later laid an ootheca. 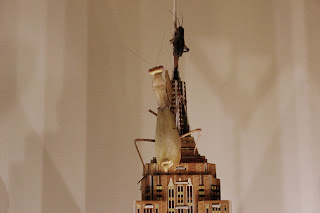 The primary food has a tendency to seek the highest spots in the Souvenir City making them easy prey for the mantis. 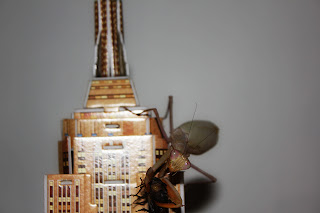 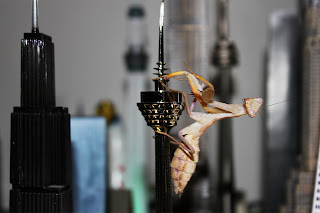 Mantis screening the area from the KL Tower. 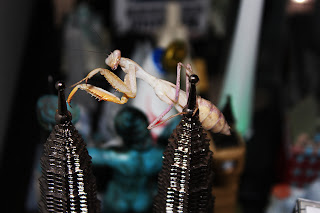 Petronas Towers, a great place for the molting phase. 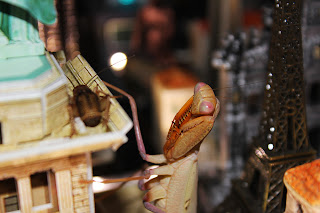 This cardboard version of the Statue of Liberty has many hiding spots for the prey. 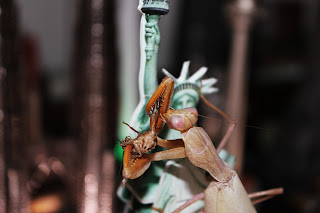 But the patience of the Mantis is endless. 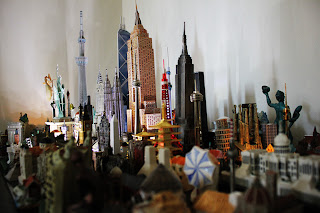 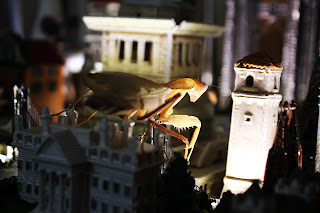 The Mantis on her way to the Fontana di Trevi to replenish her water levels. A habitat worthy a mini-monster. 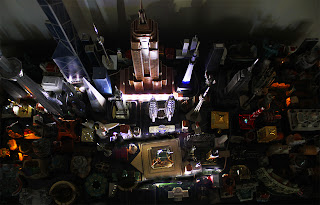 Souvenir City from above with the mantis at the Statue of Liberty.
Upplagd av visiondivision kl. 11:06 PM 0 kommentarer