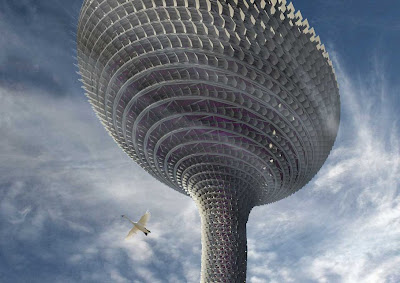 This is a powerful energy generating machine on the outside with a sensual, organic inside that transcends the visitors from the bustling city to a serene world of the performing arts. 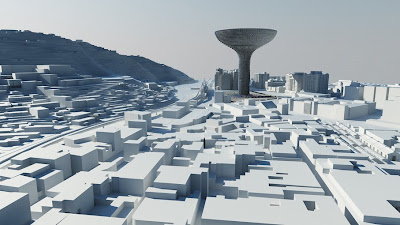 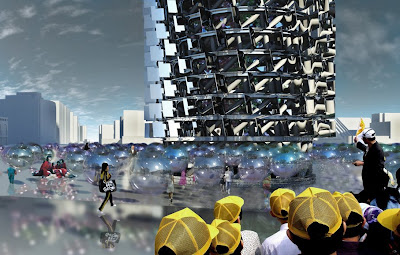 One of the positive aspects of raising the building is that it creates a generous public space around it.
The square slopes gently towards the entrance, surrounded by pearls, the visitors descends fadingly into the building like entering an ocean. 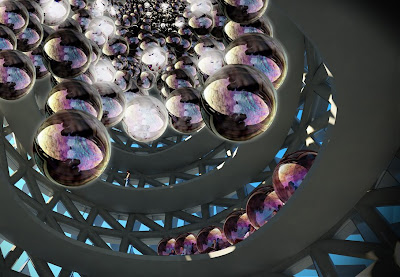 A great spiral of pearls is the main focal point of the entrance hall, you can either take the elevator through it or the ramp around it, by foot or with the VIP Train of pearls, taking you all the way into the Grand Theatre. 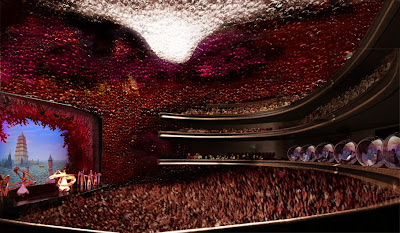 The Grand theatre is embedded in pearls, creating a elegant and modern experience for the audience. The semi-transparent pearls are lit from behind and dim the light,
creating a glowing sensation. Depending on the performance, the ambience can be set into different modes.
A chandelier of pearls in the middle of the theatre drops seamlessly from the roof like a jewel, radiating an ambient light. The VIP Train is now converted into comfortable seats. 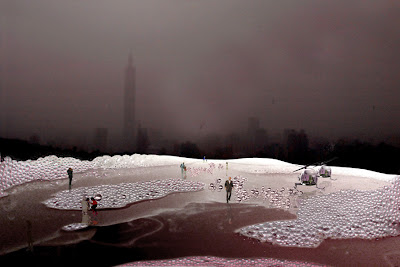 Reaching the roof terrace, the pearls subsides into clouds. Walking around among the clouds one can experience panorama views of Taipei. 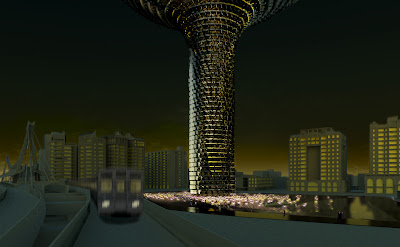 The building performs on its own for the city, generating culture, urban life and pure sustainable energy for its vicinity.
This is all strongly manifested from the visual effect of its rotating facade. 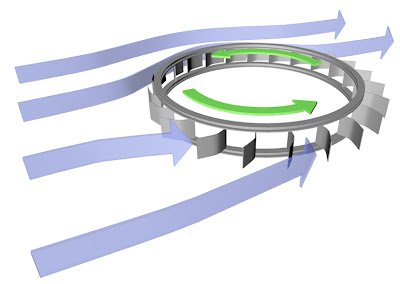 The façade is covered with curved blades are attached on segments that rotate with the wind, generating energy to the building and to the city.

The pearls are non-toxic and non-flamable acrylic balls with a tint of reflection.
Pearls in different sizes is combined into various landscapes inside the building to enhance the theatre experience. 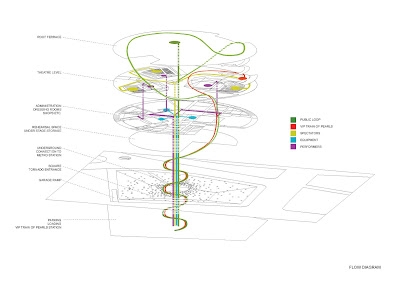 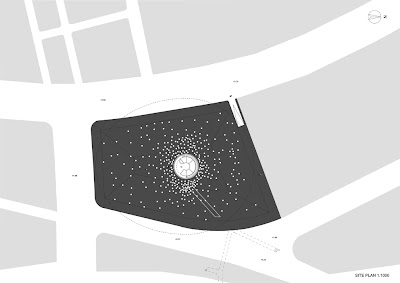 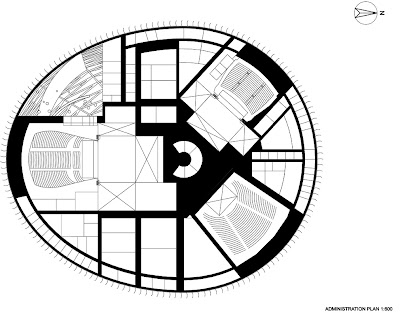 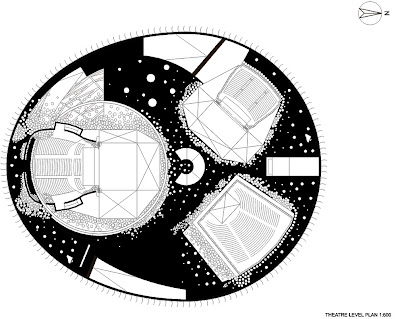 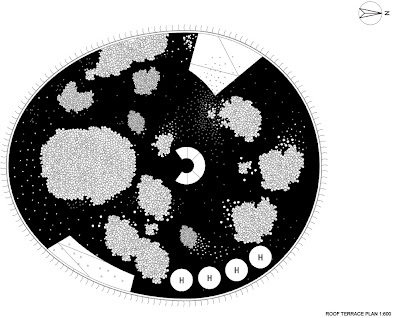 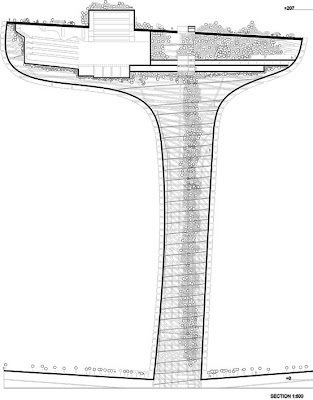 Otto studied architecture in Berlin before being drafted into the Luftwaffe as a fighter pilot in the last years of World War II. It is said that he was interred in a French POW camp and, with his aviation engineering training and lack of material and an urgent need for housing, began experimenting with tents for shelter.
In the 60s Frei Otto developed a theory of using well curved surfaces with opposing curvature, minimal surfaces, with equal tensions under prestress. He extended the technology from fabric to cable nets and used this formfinding method to develop some structures that surprised the architectural world.
The Multihalle in Mannheim is an example of this with a doubly curved compression structure constructed out of 50mm square timber and spanning 60m.

The Uros is the name of a group of pre-Incan people who live on 42 self-fashioned floating man-made islets located in Lake Titicaca off Puno, Peru.
The islets are made of totora reeds, which grow in the lake. The dense roots that the plants develop support the islands. They are anchored with ropes attached to sticks driven into the bottom of the lake. The reeds at the bottoms of the islands rot away fairly quickly, so new reeds are added to the top constantly. This is especially important in the rainy season when the reeds rot a lot faster. The islands last about 30 years.
The larger islands house about 10 families, while smaller ones, only about 30 meters wide, house only two or three.

Il Gesu is the mother church of the Jesuits.Its facade recognized as "the first truly baroque façade" and it was the model for innumerable Jesuit churches all over the world, especially in the Americas. But it is the interior of the church that makes it among the masterpieces in the vd-guide.
Giovanni Battista Gaulli's ceiling is a masterpiece of quadratura (architectural illusionism) combining stuccoed and painted figures and architecture.It is difficult to distinguish painted from stucco angels. The figural composition spill over the frame's edges which only heightens the illusion of the faithful rising miraculously toward the light above.

Lake Nakuru is one of the Rift Valley soda lakes. It lies to the south of Nakuru, in central Kenya.The lake's abundance of algae attracts the vast quantity of flamingos that famously lines the shore, up to 1.5 million have been seen at a time.

The resort building’s cylindrical form stands on a hill overlooking a beach in what was then an exclusive resort town. To enter, visitors cross a bridge encased in a glass tube and then descend into the complex, which is supported on massive legs housing the elevators and stairs. Conceived as a “social condenser,” the building’s core is occupied by a cinema, dance hall, swimming pool and cafe. Circling this core are the guest rooms, arrayed in a dazzling saw-tooth facade orienting each room toward the water and sunlight, while giving the structure an eerie science-fiction quality. 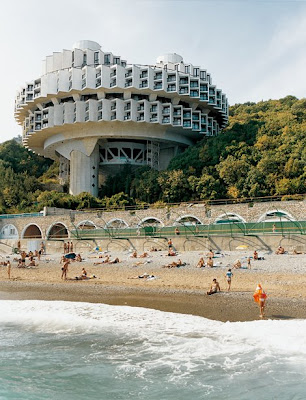 Torres Blancas is considered to be one of the finest organic examples of architecture in Spain.
It was supposed to be built in marble, but due to economical cut-backs it was made in concrete.
The rooms in the apartments are cylindrical, with organic walls and ceilings.
Some apartments has two levels and on the top floor there is a restaurant and a pool.
To visit: Av. De América 37 subway 4, 6,7 & 9 station av. de américa

Kaieteur Falls is about five times higher than the Niagara Falls and about two times the height of the Victoria Falls.It is 226 meters when measured from its plunge over a sandstone cliff to the first break.Its distinction lies in the unique combination of great height and large volume, averaging 663 cubic meters per second, combined with a dramatic setting in the jungle.

The 16-km-wide Tengger caldera is a volcanic complex that dates back to about 820,000 years ago and consists of five overlapping stratovolcanoes, each truncated by a caldera. Lava domes and pyroclastic cones occupy the flanks of the massif. This moon landscape is one of the coolest things you can see on this planet, preferably in the sunrise when the fog on the crater floor mixes up with the fresh rays of the sun.

With eight hectares in size and contains 250,000 cubic metres of water, this artificial lagoon and swimming pool is the biggest in the world of its kind.The clear water artificial lagoons is transparent to a depth of 35 metres.The waters off of this part of Chile are cold and inhospitable,explaining why the resort's developer wanted to create an ocean replacement.

Built from 1916 and opened in 1923, the design was unusual in that it had five floors, with raw materials going in at the ground floor, and cars built on a line that went up through the building. Finished cars emerged at rooftop level, where there was a rooftop test track. It was the largest car factory in the world at that time. For its time, the Lingotto building was avante-garde, influential and impressive—Le Corbusier called it "one of the most impressive sights in industry", and "a guideline for town planning".
The factory became outdated in the 70s and where remodeled into a cultural centre.

A monumental grid of interlocking concrete forms rises on a steep wooded site in Tbilisi, Georgia. The project’s genesis might prompt most architects, so often at the mercy of clients’ fantasies, to swoon with envy. Mr. Chakhava was not only an architect but also the minister of highway construction. As such, he was not just his own client; he could also hand-pick the project’s site.
Rising on an incline between two highways, the building’s heavy cantilevered forms reflect the Soviet-era penchant for heroic scale. Yet they also relate sensitively to their context, celebrating the natural landscape that flows directly underneath the building.

Another Frei Otto project, this time with Günther Behnisch.
The Olympiastadion was considered revolutionary for its time. This included large sweeping canopies of acrylic glass stabilized by steel cables that were used for the first time in a large scale. The idea was to imitate the Alps and to set a counterpart to the 1936 Summer Olympics in Berlin, held during the Nazi-Regime. The sweeping and transparent canopy was to symbolize the new, democratic and optimistic Germany. This is reflected in the official motto: "The Happy Games".With a capacity of 80,000, the stadium also hosted many major football matches including the 1974 World Cup Final, in which West Germany beat the Netherlands with 2-1.

A young architect got the commission to design a summerhouse for the excentric billionaire Simon Spies, a hedonistic Dane with taste for women and good-life.
The house is made out of reinforced plastic and is all white, a red remote control gives the owner access to the abundance of technology in the house.
An elevator from the kitchen becomes a table in the living room and so on.
Simon Spies subscribed to a Danish newspaper that where air dropped every day by plane for the cost of USD$ 1000 per day.


"I wanted to use the very fine qualities of light. First of all, moonlight. There's a space where you can see your shadow from the light of Venus alone—things like this. I also wanted to gather starlight that was from outside the planetary system, which would be from the sun or reflected off of the moon or a planet...you've got this older light that's away from the light even of our galaxy. So that is light that would be at least three and a half billion years old. So you're gathering light that's older than our solar system."

Visiondivision got the commission to do a small recycling- and pump station on the campus ground of Karolinska Institutet, one of the most prestigious universities in the world with 5 Nobel laureates among other things. 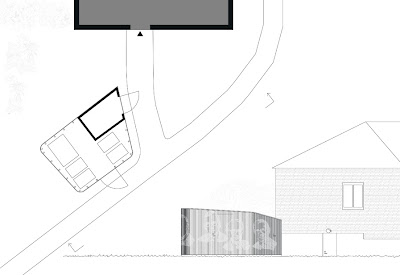 The plot that is located just next to the student union building and two pedestrian streets, could easily be used to give something back to the campus environment, so we made a structure that is shaped as a screen, where the five faces of the Nobel laureates is drilled in the wood facade. 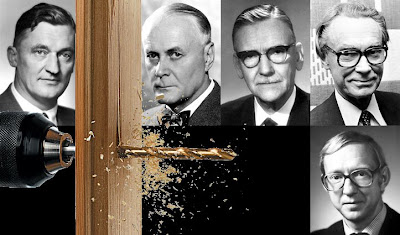 Being a recycling building for the waste materials in the nearby area, there is no need for insulation and the holes would function as ventilation as well. 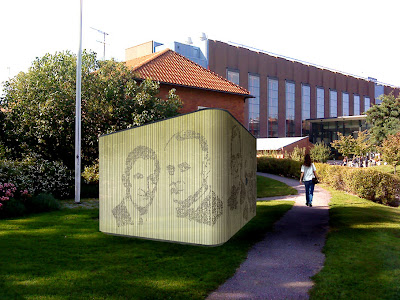 At night time the small building will glow as a lantern of motivation for the students that walk home after a hard day of studies. 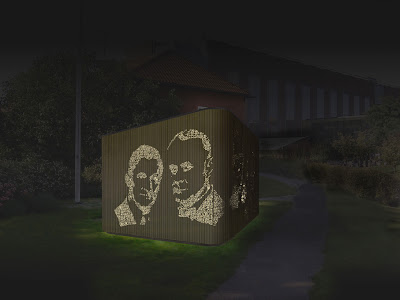 If you happen to be in Barcelona this or the next week, we could warmly recomend the 2G exhibition where visiondivision is exhibited with their proposal "The Merchants of Venice".
The exhibition will remain open from 25 September to 10 October.
If not, you could soak in some exhibition atmosphere below. 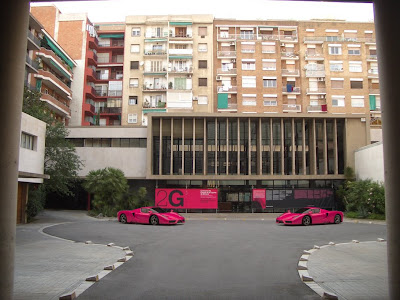