The new Pop centre in Taipei is a city in itself, designed to transcend its visitors into a total escapism of pop. The enclosure makes the experience inside strong and focused and gives the structure’s different districts a framework of function and identity. The wall will act as a noise barrier as well as a very straight forward tool of communication.

The tower in its center projects light to the different parts of the town as stage lights or to enhance the setting. Every district uses the effect from the tower in some aspect and is consequently designed according to the angles of light.

The lights can make the whole building expand dramatically in appearance, from rather low key from a distance into a spectacular body of light; forming a unique landmark for this developing part of the city.
The projections also works in a smaller scale, such as high precision laser to light up a visiting Tina Turner's Martini for example. 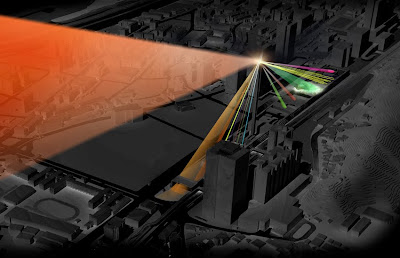 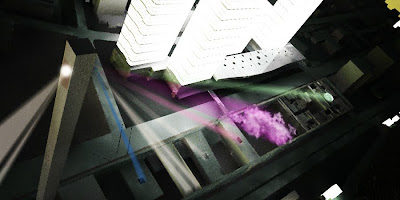 Aerial perspective of the eastern parts of the building

The Star District hosts the office part with rehearsal studios.
As an extra feature we also added a guest star palace.
The rehearsal studios and office space is located in a flexible and large space that are easy to change after specific needs. All office space and rehearsal studios can be reached internally through the surrounding walls. The streets and the small squares in these blocks will be an important area for intermingling for the guest artist and entourage with the local artists and office personnel working in the building.

The star palace features a hotel for the artist’s entourage on the first three levels. The upper level is a penthouse suite for the guest artist with an exclusive pool overlooking the whole complex and formed as a glass bowl that can be illuminated by the tower. 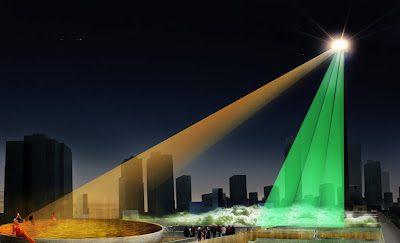 Star District with the star pool 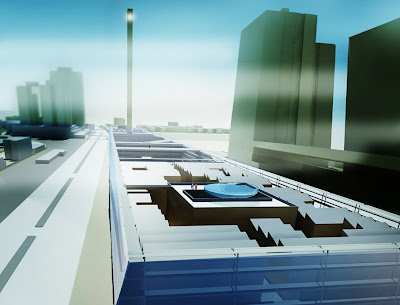 Star District
The outdoor arena is a plane surface surrounded by walls with three levels of balconies on each side. Hovering over the space is a rig with smoke machines that allows it to be disguised as a cloud. The cloud rig is mounted on a rail with a light and sound system that can support the scene anywhere on the arena area either as a roof for the artist or as a separate feature emphasizing the show. When not used for shows the arena can serve as a big square with great scenographic opportunities for markets, car shows, parties etcetera. 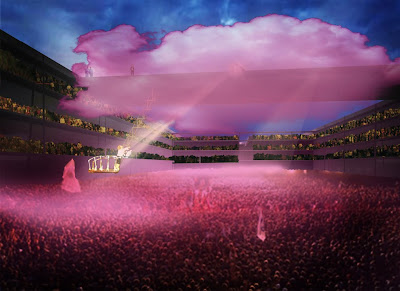 The cloud and the outdoor arena
The live houses are located in the centre of the building, connected both to the outdoor arena and the commercial district. The live houses have different scales and characters for different performances such as a hovering outdoor live house as well as small and big scale indoor live houses. All live houses, except the smallest ones, have holes punctuating the roofs for the projections from the tower to reach the scenes. In between the live houses is a tranquil park for recreation with features like headphones to just relax for a moment while visiting the complex and a projection wall for the tower to display music videos or other moving media. The live houses are placed so they can be reached separately from outside the complex for easy controlled night activities. 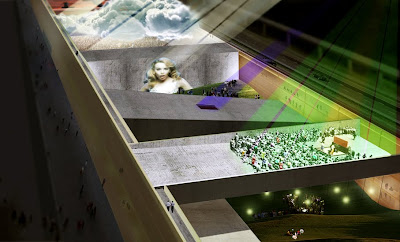 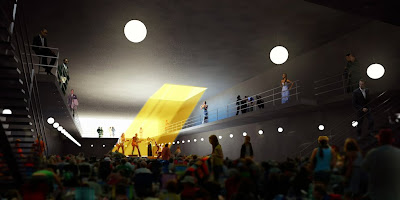 Inside a livehouse with stage projection
The commercial district consists of the central square with the tower, the hall of fame and a great cluster of bars and shops that continues on the sloping roof terrace of the main auditorium. The main square is an important entry point to the complex with a close access to all public events.
In the middle of the square lies the tower which is a clearly visible landmark and controls the light ambiance for the whole complex.

The Hall of Fame is easily accessed for the public via the main square and hosts a great collection of Pop memorabilia as well as a permanent exhibition of the supreme of pop.

The shops and bars are relatively small units tweaked towards the tower to individually light up a preferred interior vibe via the glass roofs. The many small streets and squares makes for a vibrant atmosphere, perfect for a pre-drink before a concert or an evening stroll. 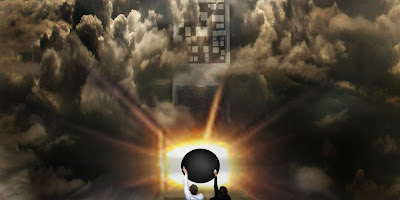 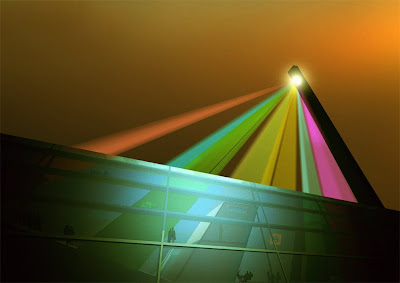 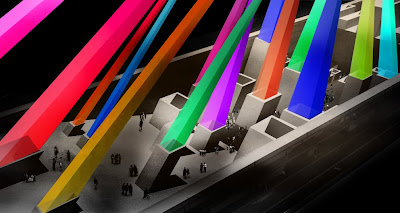 Shop district with projections
The main hall provides a unique concert experience; large punctuations in the roof for the tower projections lights up the whole scene as well as a large part of the hall.

The sloping spectator area is made out of glass beams which can transmit light out on the auditorium plaza, creating an epic foyer for the arriving crowds. The auditorium foyer/square is protected from rain by the large overhang and acts as a connection hub for pedestrians; interlinking various footbridges and takes the visitors to the desired floor level.

The roof on the auditorium becomes a sloping terrace down to the commercial district with views over the whole complex. 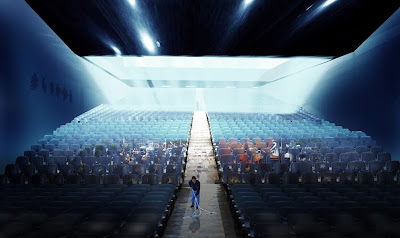 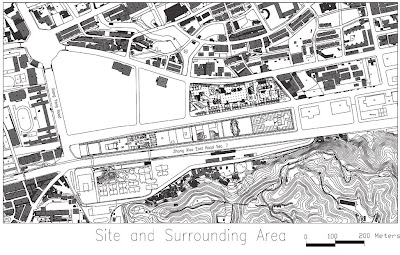 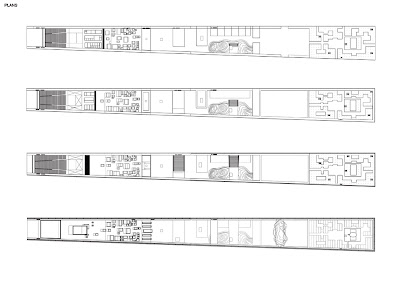 Plans
Thanks to Andres Morelli for some of the 3D renderings
Upplagd av visiondivision kl. 5:34 PM 2 kommentarer

Visiondivision – Idealists in the 21st Century?

Read the insightful interview by Craig Chamberlain, an author and freelance writer for RIBAJournal, the magazine of the royal institute of british architects. 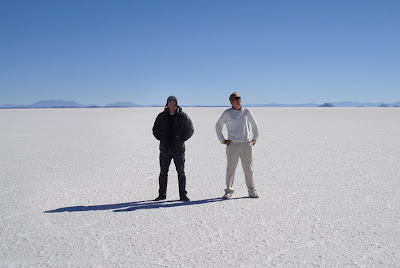 visiondivision is invited to participate in an architecture production at the NOTCH FESTIVAL in Beijing with Svensk Standard for three weeks. The result will be published next month.

"The Village at Sanlitun is an open-plan shopping, dining, entertaining and cultural community in the heart of Beijing. The Village South blends a traditional hutong village lifestyle with 21st century modernity and sophistication. The Village North, openingin autumn 2009, comprises a cluster of glass buildings which house an enticing array of creative luxury brands.
NOTCH Festival will take place in both The Village North and South, both indoor and outdoor, will transform The Village into a Nordic fashion terminal, leading a new creative lifestyle and audio-visual culture in the town.
由香港著名太古集团旗下太古地产管理，位于北京三里屯的潮流腹地，汇集众多国际品牌旗舰店和环球店，其创新的建筑设计和人文气质为北京带来了一个全新的、融合了各种创想和潮流的、集购物、娱乐与餐饮于一体的人文风尚汇。街区型的有机布局将传统与创意、本土与国际的最新潮流生活方式兼收并蓄。南区广场和橙色大厅举办的一系列文化艺术活动带给人们变幻出新，惊喜不断的多方位体验。
从北区的钻石楼，户外下沉式绿色广场The Deck，到南区的橙色大厅和户外大屏，NOTCH将多方位、立体式渗透进三里屯VILLAGE的整个区域中。三里屯VILLAGE借NOTCH发布北欧最新时尚设计潮流，引领绿色创意设计生活时尚和视听文化新风潮。"

Our project Wat Hut is now under construction and is estimated to be completed in early November.
This lovely house has many special features such as an outdoor cinema for six people, two caves that is reached from each of the two children's room and last but not least a living room with fake grass that is connected to the outside grass in a stunning fashion.
More images and drawings when the building is finished.