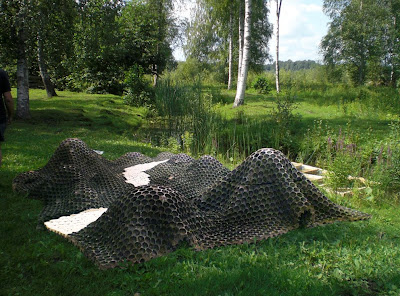 Cancer City on dry land before putting it in the river

A country gentlemen once bought 10000 crayfishes in the 90’s to plant in a stream running through his land. In the autumn he would capture about a hundred of them to eat at the annual Swedish crayfish parties. The crayfishes however slowly started to emigrate to another nearby lake outside the patron’s estate. Desperate of seeing his neighbors feast on his crayfishes, he contacted visiondivision to solve his problem.
Visiondivision decided to help the patron by building him a refugee where the crayfishes could imigrate back. By investigating the condition of the stream we soon found out that it was the lack of stones, hiding places and the lack of calcite that probably had made the crayfishes emigrate. The city planning would focus on solving these issues.

The design became an undulated concrete landscape where the crayfish live inside the hills. The hills are equipped with lids so the gentleman can walk on top of the landscape, capturing his yearly crayfish quota. A white path runs on the construction so the hunter can hunt at night time when the crayfish are as most active. Water proof LED lights are attached inside the hills that attract the crayfish and make them visible for the hunter. The hills have several escape holes and underground safe zones so the hunting won’t be too easy which would be unjust to the crayfishes. 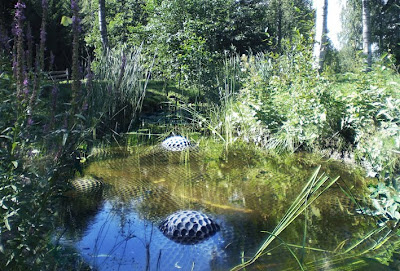 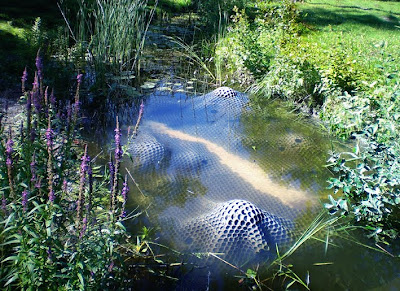 Cancer City in the stream 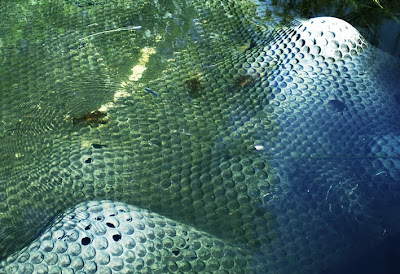 Crayfish in their new home town 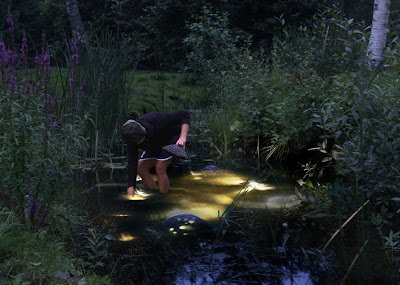 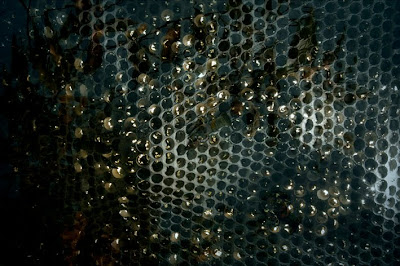 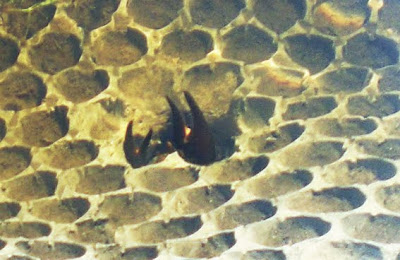 The choice of material was crucial for the success of the project. The construction obviously should be water resistance, the city should be strong enough to carry some full grown persons or animals walking on it, the city should also provide shelter to the crayfishes and the construction should not be too heavy since it should be moved to a remote place where no machines can go. The choice of material became "Butong"; a lightweight slightly transparent concrete invented by the firm with the same name.
Butong is only two centimeters in depth without any metal reinforcement that can rust and the mould could be bendable after casting which enabled us to make an undulated landscape of concrete without having to build time consuming casting forms. Another attribute with Butong is that it includes calcite; a substance that attracts crayfishes.

The exquisite concrete endeavour is now resting in the stream waiting for its inhabitants to arrive. Walking on the flawless craftsmanship just one week after inauguration we met one of the first inhabitants staring at us from its new nest. 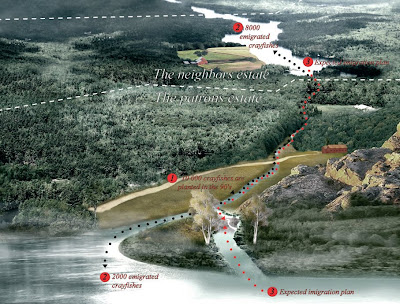 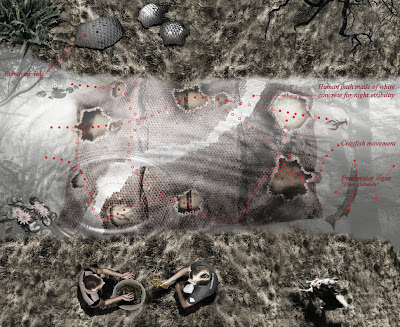 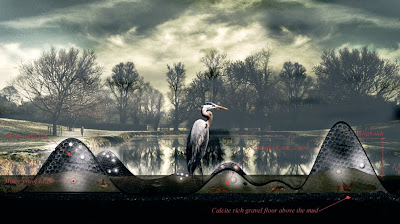 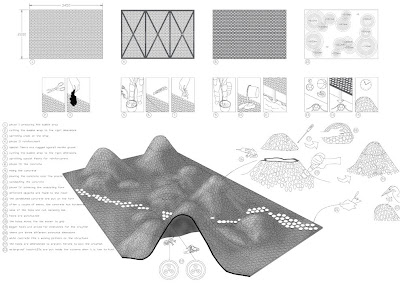 Hill Hut is once again in the eye of the media hurricane, now on the front page of Dagens Nyheter, the biggest newspaper in Sweden reaching millions of people every day.
If you can't get a hold of a paper, you can see the article here. 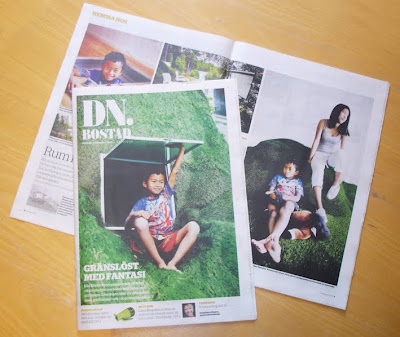 As you see we are implementing our main flash page into this blog, making it a superblog. Please have patience if it is not working properly in the next few days.
/The management
Upplagd av visiondivision kl. 9:51 AM 0 kommentarer

This is a competition entry for a municipality building in Täby, a suburb outside Stockholm.

A municipality building is both a general work space that constantly changes and evolves and a representative house for democracy.
These different functions in one single building can give a rather messy impression and be hard to read and therefore unable to communicate its important content to its citizens.
With our proposal have we tried to separate the different functions by layering them on each other and give them a different appearance depending on function.
This clear idea is also stated in the interior of the building where the different parts are designed according to its function.
The lower part of the building is the institutional and also the public.
This part is designed as open and as accessible as possible. A grand stair goes from the main square to a smaller square that is shared with the adjacent library where outdoor meetings and other events can be arranged.
An acrylic dome that holds the assembly hall pierces the main square from where you can look down on the meetings and also hear them with earphones; one of many democratic gestures that is typical for the lower part of the building to show the transparency in the politics.
The upper part of the building is the non-public one where the officials can work in privacy. This part with general and highly effective offices is raised from the public sector thus creating a roof for the square. 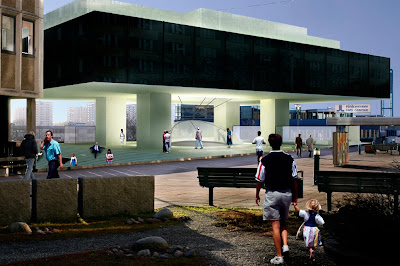 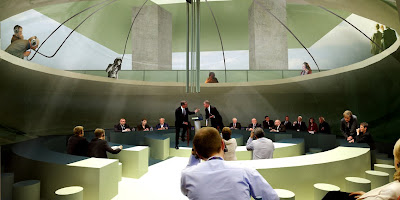 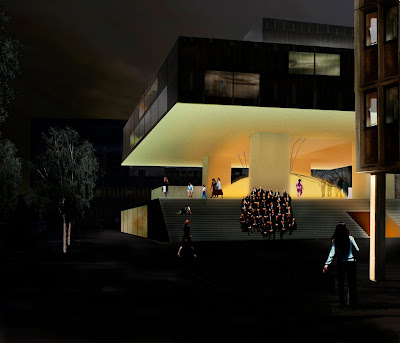 Exterior view from the library square 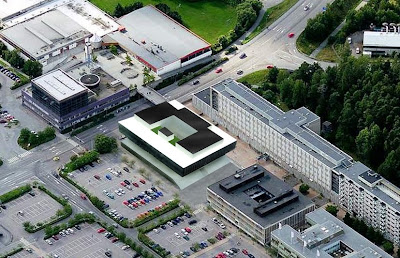 Aerial view showing the two seperate functions of the building 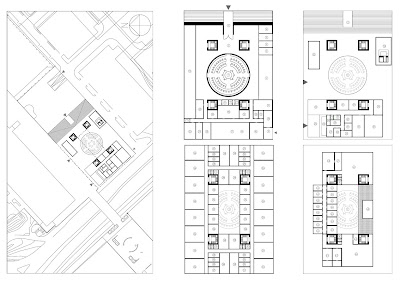