Synopsis: The story takes place in the early 70s when a young senator tries to convince the congress of the United States of America to build a new White House.His ideas are radical and looked upon with a great deal of scepticism and the congress rejects his proposal unanimously.
Humiliated and disappointed, the senator flees the country to look for inspiration and to understand the symbolic value of Architecture.
Will the senator give up his ideas or will he succeed in his battle against the narrow-minded congress?

Follow this young man's struggle in this visiondivision production that deals with the very inner core of architecture and ambition.

Here comes an additional text with images to the video posted under the "Collection" post earlier this month;

Visiondivision got the comission to give 8 power plants in gothenburg a new identity.We gave them a collection of projects, ranging from a small scale to pharaoic wonders.
The biggest part of the commissions was to renovate one of the city’s major power plants; Sävenäs. The plant is today a collage of different non good looking building parts. Our sketches vary from low-cost solutions with a big effect, to a more iconic brave architecture. 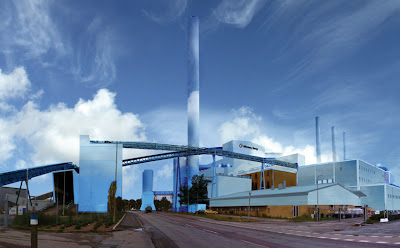 The first sketch was to paint the whole thing blue, It would merge the different building parts into one major complex mass. The blue paint also fades from matt at the lower parts of the building to glossy in its highest parts. 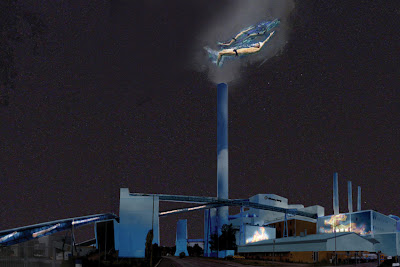 At night different projections forms a moving story on how the power plant is functioning, following the story the viewer will see how wood is turned into energy and then see the waste products going up the chimney as water vapour. 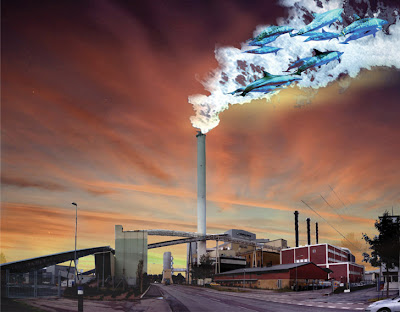 To manifest that the smoke is actually just water, we propose to project dolphins and other sea animals in it. Projecting in the smoke also gives a big visual effect and can be seen from miles around. 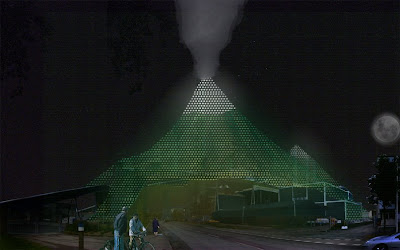 We also had to do a more brave proposal, after all we are visiondivision. So we made a true iconic wonder; a digital volcano. The construction is rather simple; a net is draped over the whole building with LED-light, starting at the 100 m high chimney. The LED-device is also a solar cell, making the system energy-independent. Each one of the devices can change color and therefor can the volcano take any visual expression. 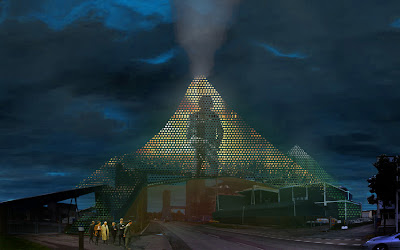 The power plant has a great exposure potential due to its strategic location next to the highway and the railway leading in and out of Gothenburg.Advertisment, concerts or maybe digital art? The options are endless and the company will have a media icon unseened of in this part of the world. 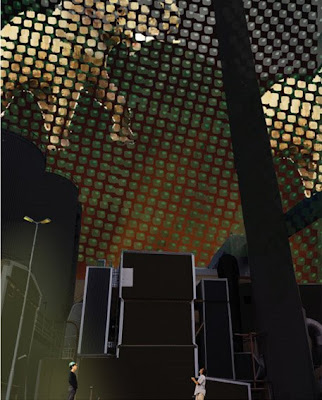 Sävenäs power plant has many employees that now will experience the net as a big roofwith a ever-changing repertoire of visual delights. 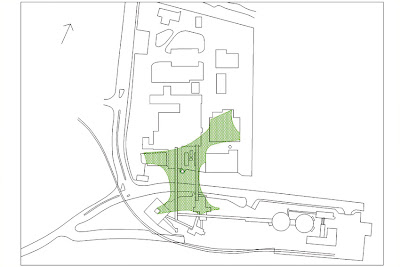 Plan: volcano net
The second part of the commission was to renovate seven smaller power plants in the suburbs of Gothenburg. Visiondivision made a list of improvements that would be cheap, quick and function separately from each other. The tree major design concepts were to clean up the surrounding areas of the plants, design more visible signs and to surprise visitors by adding something new to the context. 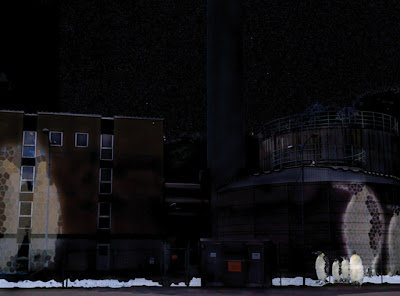 To add a new and more positive design to the plants we decided to upgrade the building parts with the most negative associations; the surrounding fences. By filling the fences with Plexiglass we created a thematic image that can be seen from a distance.Parts of the image could also be projected at the facades by putting headlamps in front of them. 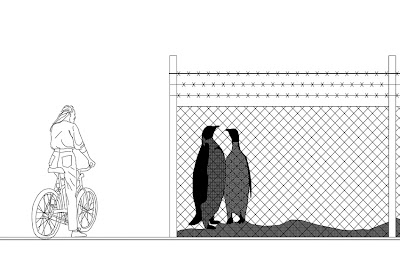 A fan has accused us of copying the OMA villa; Anish Kapoor house.

According to him, Villa Sondefors has the same shape, the same layout of rooms, the same program and a swimming pool located at the same part of the house as the Anish Kapoor house. ( 0-1 VD – OMA) 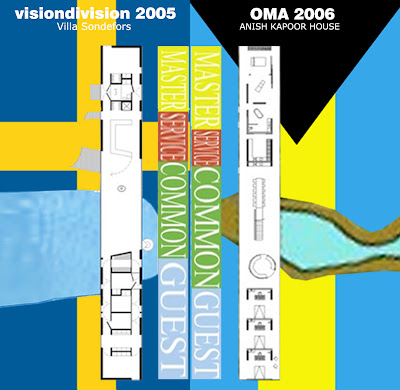 Well, we have to admit that the houses have some striking similarities, however we had not seen the resemblances before you pointed them out. A major difference is of course that Villa Sondefors is actually hovering over the water whereas the Anish Kapoor house is not. (1-1 VD – OMA). Well the case is simple; just check out the dates and you see that Villa Sondefors is designed one year before the Anish Kapoor house (2-1 VD-OMA) which according to OMA is designed in 2006. So don’t worry man, visiondivision do not copy other architects at least not deliberately.

hmmm wait a minute could it not be the other way around? It is time for some detective work.

At the end of 2005 AB send his portfolio to OMA. The second page on that portfolio has actually Villa Sondefors on it made in 2005. When AB starts working in OMA in the spring of 2006, Anish Kapoor House has already been designed. AB sees the model of the house in the office without noticing the resemblances. But according to the dates, Anish Kapoor house must actually have been designed just after OMA received a presentation of Villa Sondefors. A lot of funny coincidences in the small world of architecture? Or does OMA borrow shamelessly from their intern’s portfolios? Who knows? (Probably 2 - 0 VD-OMA)

Well if OMA copy pasted visiondivision, we just want to say that we couldn’t care less. visiondivision is a humble architectural firm that cares for the older generation, and if an old artist wants to play our music, we are more then willingly to hand over the notes. The outcome of this could not be more satisfactory for the vd crew. Villa Sondefors was declined by the Swedish building comity for being too odd in a Swedish landscape, but now Villa Sondefors hopefully will have a sister building in Bahamas instead. What a great surprise! And what a big mistake of that Swedish municipality. Good Copying can sometimes be ok. Declining good architecture will always be a crime!
Final score:
1-0 Bahamas-Sweden.
Upplagd av visiondivision kl. 4:29 PM 0 kommentarer

Venice Biennale and the 2G magazine

We told ourselves that we had to be exhibited at the Biennale before we turned 30, or leave the dirty business of architecture to commence a hot dog salesmen career in Solna Centrum.
With three years to go, we are finally there; not in Solna Centrum, but in Venice.
So if you plan to visit the Biennle this fall, schedule an important stop where the vd project The Merchants of Venice is exhibited.
More info about exhibition dates will come up later on. 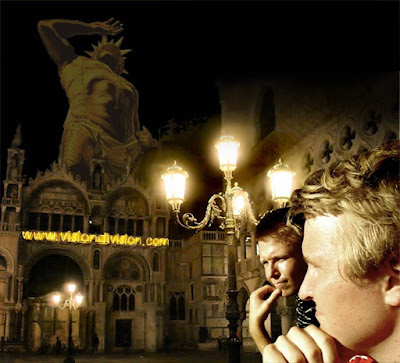 Until then, why not buy the September issue of the 2G Magazine, they will feature visiondivision in it too. We also have an upcoming exhibition in Barcelona later this year, the date is not fixed yet, so we will tell you later.

Now the two youngsters are both in Stockholm, gathering speed and force for an outstanding fall, with an upcoming total makeover of the slow http://www.visiondivision.com/ and a bunch of competition entries full of wit, character and pure beauty.
Upplagd av visiondivision kl. 11:13 AM 0 kommentarer