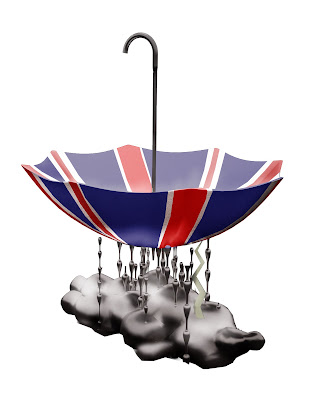 Competition entry for a new drinking fountain prototype in the parks of London.

The concept is quite simple; an image of bad weather is turned upside down and creates a very strong icon for a drinking fountain.

The overturned umbrella acts as the water basin, the raindrops as its structural support as well as water pipes and the cloud as its base.
A lightning coming from the cloud lights up during the night.
Rainy weather is a very suitable symbol for both a drinking fountain and the city of London and will surely attract many thirsty park visitors
around the city to quench their thirst.

Construction
Vertical metal pipes with drops mounted on them are holding the structure. The dimension of the pipes is changing depending on function, making the outer ones constructive pipes and also the water pipe is a bit thicker due to factors as vandalism. The sink is made of plastic that is later painted in various combinations. The base is cast and polished concrete with drilled holes for assembling the pipes underneath the base.
Materials can be altered after consultation depending on cost and durability. 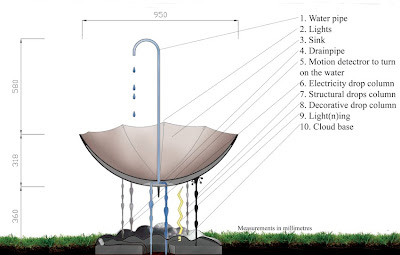 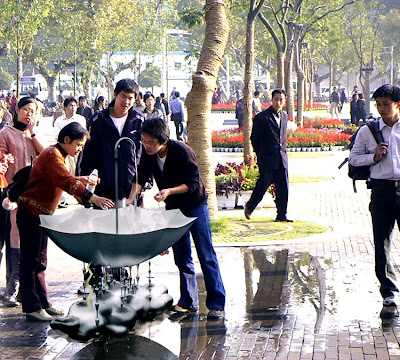 There are an endless assortment of patterns and colours for umbrellas and no matter how they look they are still unmistakable recognized as umbrellas. The drinking fountains can therefore be carried out in a great variety as well, without losing its familiarity as an object.
The different styles can be chosen according to the various parks location and image and the result will be a great number of different drinking fountains that comes from the same module.
The bad weather module can also be done in a divided edition and can thus be wall mounted. There is also the possibility to sponsor some of the modules, just like corporate umbrellas.
Many thanks to our Colombian friend Andres Morelli for the renders. 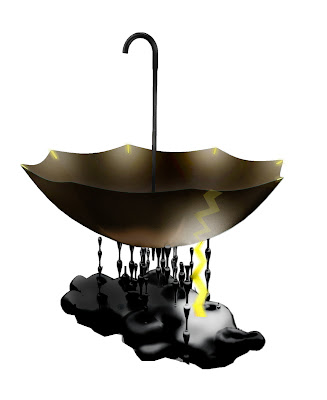 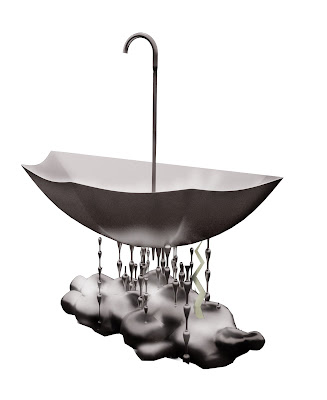 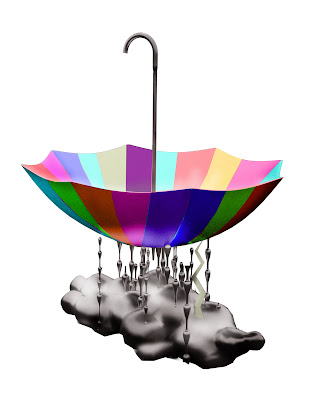 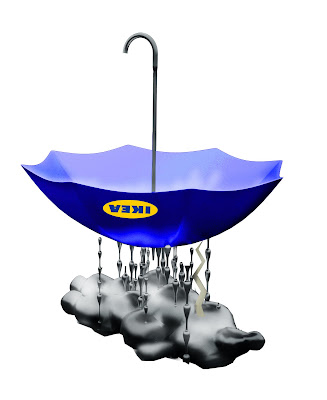 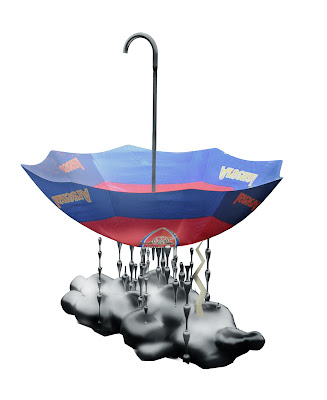 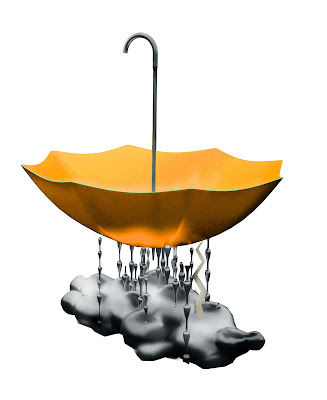 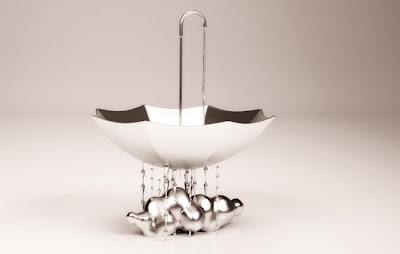 100 000 brilliant architecture conoisseurs from all over the globe has now visited our website and hopefully found some inspiration among our many projects and adventures. We would like to thank you for your visits and the countless e-mails that hearten our organization to continue our ceaseless struggle in the field. According to Wikipedia the respectable sum of 100 000 equals a field army, thus giving us the feeling that we have achieved the incorruptable rank of Generals of brave and gifted architecture. 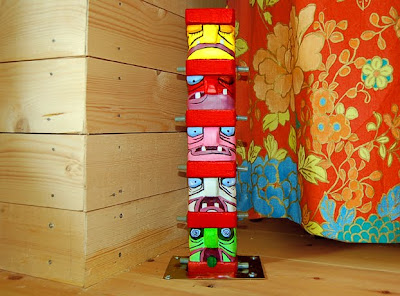 A client wanted help to build a small summer house inside of an old shed at an island in the northern Stockholm archipelago. The shed is just next to the Baltic Sea and has been exposed to overflows every tenth year or so. Knowing that the house probably will be hit by another overflow and the fact that we were only allowed to build inside the shed forced a specific design.

To build a totally waterproof house would be too expensive, so this house is constructed as a lizard’s tail. If one part of the building gets exposed to water that particular part can easily be replaced without affecting the rest of the building.
The whole building is constructed by spruce boards and spruce pillars and with no synthetic materials in its lower regions. The horizontal spruce boards can be taken away when exposed to water to dry and later be put back or be replaced by new ones. The house is insulated like a hat to not be affected by an overflow. The electric parts of the house are also put in the higher regions of the house and will not be affected by an extreme overflow.
Since the client mostly spends his time there during the summer, we also had to come up with a warning system if the water levels have been reaching the construction underneath the floor and need to be ventilated during overflow season, which is usually at spring time. The warning system became a rising totem pole where the face changes its mood depending on how high the water level has reached underneath the house. 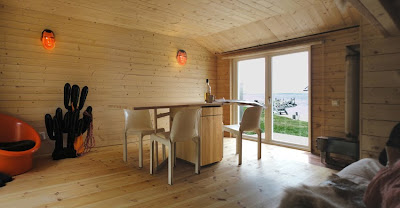 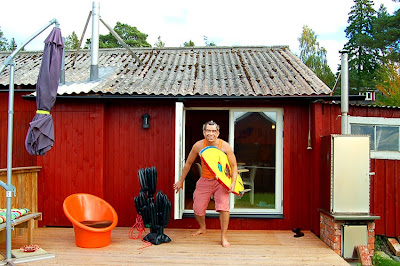 Since the shed was too slanted we could not rely on its structure and had to build a totally new house inside. To get as much space as possible we tried to build as close as possible to the old structure, giving the floor plan a long niche along one of the walls where we decided to put a battery of functions. The battery consists of a small kitchenette, a storage space and an expandable bunk bed which is all constructed out of spruce boards as well. One positive outcome of that is that you have the best view in the house from the bed so you can fall asleep watching the bay’s midsummer sunset. The only change to the existing façade is the big window and a wooden terrace with a outhouse on it towards the see and a new entrance door, hardly exposing the building’s new function which gives a pleasant surprise for visitors. 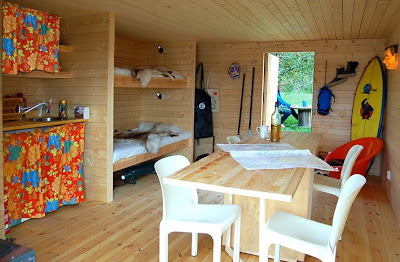 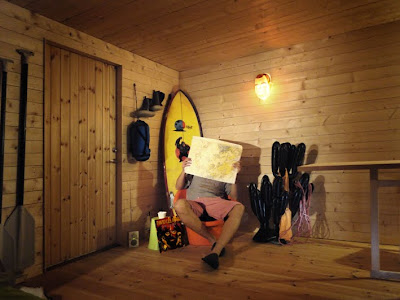 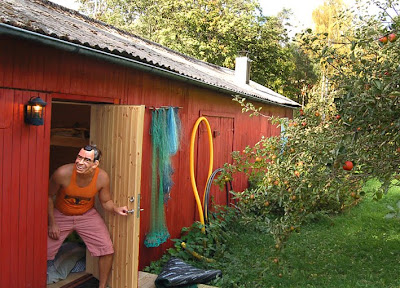 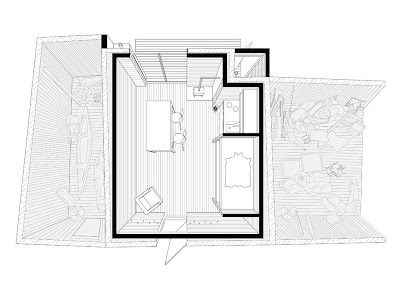 Section with an overflow chart 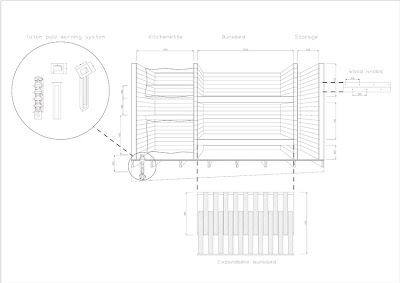 We did not design what furniture that would be put into the house but since the house will be occupied by lots of people with a sailing and surf interest we made a back wall filled with wooden hangers. Since a lot of the stuff that will be hanging on that wall will have sail and surf aesthetics
We made wall lamps using Nixon masks “Point Break” style to match all of those gadgets. 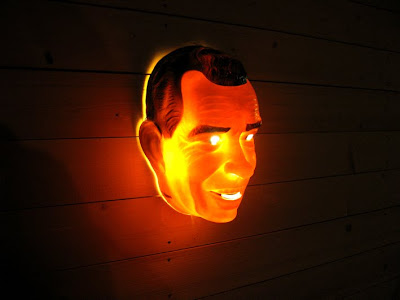 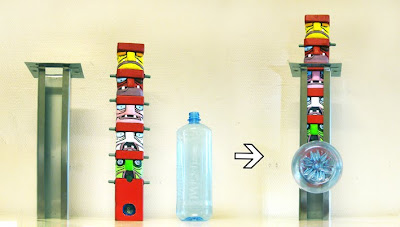 Assembly of the overflow warning system 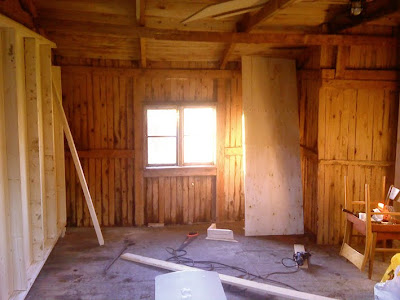 Two new architecture books are now out in stores featuring some of the capacious project flora of visiondivision.
The Korean "Architectural Model" includes several prodigious models made by the enthusiastic team and the German "Staging Space" includes the remarkable Hill Hut.