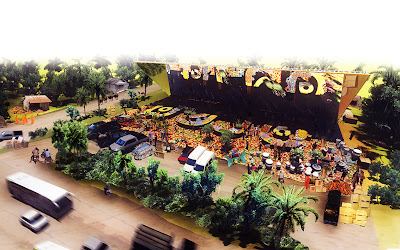 A client commissioned visiondivision to create a shop for showing and selling goods next to a highway in the Nakhon Ratchasima area in Northeastern Thailand.
The client is involved in many different enterprises, like manufacturing pottery, trading with flowers and garden trees, growing fruits, mushrooms and vegetables and also buying and selling shoes and clothes.
Given the variety of the products, we soon concluded that this spread out variety could be hard to promote successfully in one single shop.
In this region of Thailand, many people has small enterprises where they sell or have a little restaurant in their front yard. The problem for many of these people is that they don’t have any proper location to show their trades outside their homes.
We therefor thought of creating an attractive market where the client can rent out small spaces to entrepreneurs and also sell his own goods mixed up with other peoples merchandise to attract a larger crowd for his products as well as the market.
Since the site is located next to a busy highway, there is a great opportunity to attract visitors to the market that we wanted to take advantage of.
When travelling on the roads of Thailand, you will often see enormous billboards with ads.
These billboards are sometimes so big that small squatter communities uses the steel frame as support for their shacks and takes advantage of the electricity system that the sign has. Sometimes you even see that old commercials have been re-used as facades.
This large scale advertisement, and that the sign can also be the backbone for a small community, was something that we wanted to work with, but instead of showing just an image to lure the bypassing cars in to shop, we wanted to make a sign that directly showed what was going on at the market, like a live stream video that at the same time would draw a lot of attention.
To create this effect, we decided to use a steel structure similar to the huge billboards, but we tilted it forward and clad it with a shiny mirror coating so it would reflect the activity and the products of the market itself and at the same time become a roof for a part of the market.
As the centerpiece of the market, we created an inverted formation of market stands that are formed as the word for “market” in Thai, ตลาด. The gold colored mosaic stands are also lit up at night.
Thus, the market becomes the actual sign that will promote it, and as the customers walks in, they also becomes a part of the sign, making it an interactive experience.
The structure itself has two clearly defined areas; one clean advertising side that are facing the highway and one raw backside with the structure that is holding up the sign, and where there also are some no-frills toilets, an overnight lodge for a security guard, storage rooms, solar panels and water tanks that collect water from the corrugated roofs.
The weight of the water tanks also helps the building structurally.
The market itself is a raised cement platform covered with local mosaic tiles that will create a colorfully chaotic kaleidoscope backdrop for the golden market text and the many goods and people that is on show. 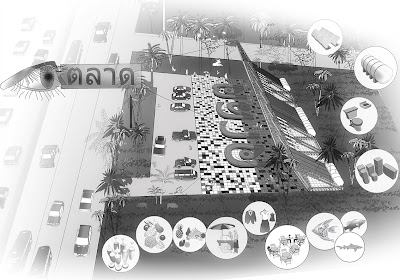 Axonometric view of the market with the surrounding site 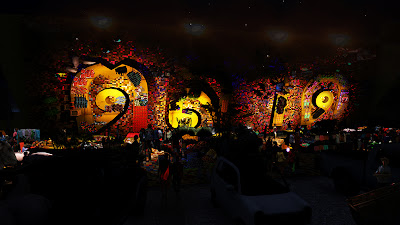 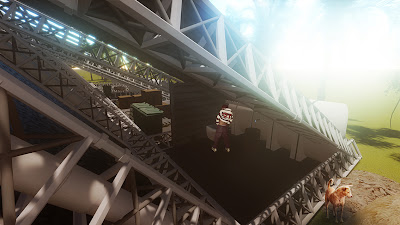 The market from the back with its structural backbone 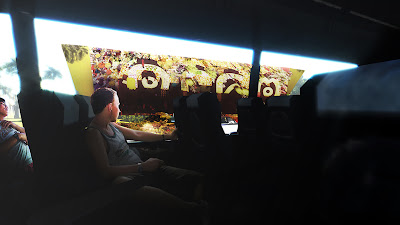 The market from the highway 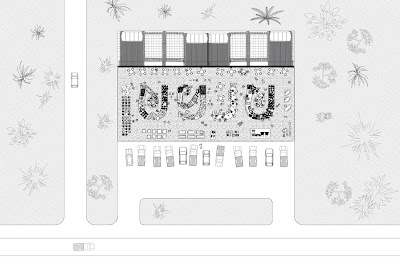 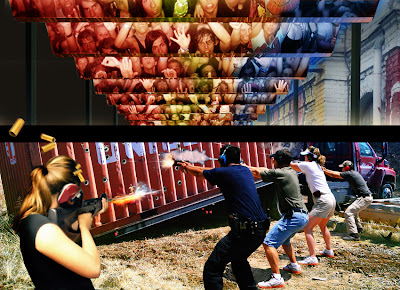 Visiondivision was assigned to design a new entrance for the music forum “Arene” in Vienna.

In 1976 activists who called themselves “Arenauts“, squatted an old slaughterhouse in Vienna.
Since that day the Forum Arene Vienna has grown to become the provider of Austria's biggest alternative cultural communication center.
Due to the wide array of events and the variety of big music acts to small alternative ones,
visiondivision's commission was to design a roof for the waiting crowd for the different concerts that would have an aesthetic that would appeal to this wide range of concert goers and their specific musical genres. It would therefor had to please the death metal aficionados, the hip hop lovers and the pop fans at the same time. Since the Arene is a non profit oriented organization, the clients where looking for low cost solutions. Visiondivision designed two different low budget ideas; one based on the tectonic approach of building a simple roof structure, and one idea based on taking a ready made and redesign it by different techniques of subtracting material.

The Mega Corrugated Mirroring Metal Sheet
The tectonic approach is a simple roof structure. Corrugated steel sheets is one of the cheapest materials there is, and it has a suitable atmosphere for an underground club that hosts everything from punk concerts to hip hop. We decided to design our own corrugated steel sheet; a mega corrugated mirroring metal sheet.
One of the experiences while going to a concert is standing in line. Thats often when people interact the most with each other and depending on what concert there is, the crowd looks different as well. The mega corrugated mirroring is designed for that specific purpose. The ceiling will change appearance depending on which type of crowd the concert gathers. If you are on a punk concert the roof will look punk, if there is a black metal concert the roof will look more devilish. The roof also has a social purpose; people can interact with each other through the mirroring roof, get eye contact with the people in front or behind themselves in the cue and perhaps flirt or start talking to each other.

The Machine Gun Mayhem
Since the area for the project almost had the same foot print as a shipping-container, and that the Arene people would most likely build the structure themselves. Visiondivision also looked into the solution of buying a cheep container and remodeling it with different types of tools, ranging from control to mayhem. In the controlled version the people at Arene could carve out the container with different building tools as a social interaction during a weekend. The result could various depending on who and how many would do the carving. Another type of carving would be more aggressive. The container would be taken to a field and shot at with different types of machine guns giving it a finish that could suit a rough environment. 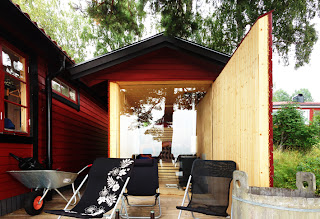 When the vd team is on vacation they can always stop by and enjoy their old masterpieces and at the same time do a meticulous inspection on how their projects has matured. This summer, the first project ever erected by visiondivision got revisited six years after its inauguration. The result was flawless and the clients praised the building. The sauna experience is world class and there is no bad aging signs what so ever. And most important of all, the project is still under the radar for a certain crowd.