So we finally did a competition in Dubai.
The Arabic influences we came in contact with on our Sahara field trip helped us greatly, and it is also from that trip where we got the idea of the storyteller, which is a genuine Arabic phenomenon.

They wanted an emblem building, like the Eiffel Tower for example, that would at the same time interact somehow with the Zaabel Park; the Central Park of Dubai.
Zaha Hadid was in the jury so probably they would like some shape experimentation, but that’s not so interesting, at least not from our point of view anyway.
Buildings with a symbolic value easily becomes quite cheesy, so we focused on what this great park could use instead and asked ourselves if they really needed a building to become famous and give their park something unique.
Interaction with buildings is only done in 2D, which is a little bit boring when you think about it, so we wanted to give them a 3D experience.
We gave them a big statue that can move its head, its arms and rotate its torso as well as telling stories.
We have been experimenting a little bit with robots in the past, but never before in this scale.
These are probably the new statues for the 21st century, giving a whole new layer to the monument. 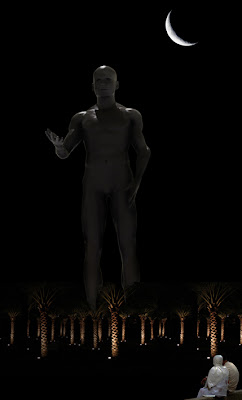 The Proposal
The Al-Hakawati is a storyteller whose profession is to spellbind his audience with his eloquent stories and tales.
It is a beautiful profession that goes way back in ancient Arabic times and still is performed in the Arabic world today.
Unfortunately the profession is dying, along with all the stories that have travelled from people to people for generations.
But Dubai can now have its own Scheherazade, the storyteller of One Thousand and One Nights, to recite all the legends and stories that the Arabic culture is so full of, and where can be a better place to relax and enjoy these tales if not in a vast and beautiful park like the Zaabeel Park.
The storyteller will add an extra layer to the park environment, making people linger
longer in the park, promoting conversations and stimulating the imagination, unifying the different parts of the park with its appearance. The statue will be a home of stories; a children’s library in its base and various spaces for performance and reading inside of the statue. 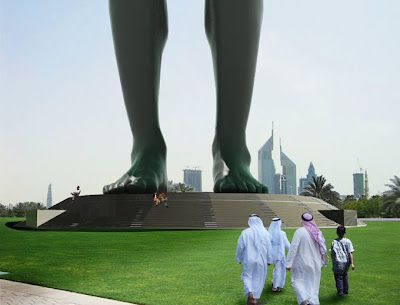 The podium which contains a childrens library

The statue will leave a small footprint in the existing park and it will enhance the park
experience for everyone; as a unique visual landmark and a creation of new possibilities for the park.
In every part of the Zaabeel park, small speakers are set up so people can gather around them and listen to the statue when he recites stories; perhaps great legends from One thousand and one night, historical anecdotes from the city itself and future speculations, all this performed with an animated body language.
Families can relax in the well kept grass areas of the park while listening and gazing at this new friend of the city.
A continuous monument of memories. 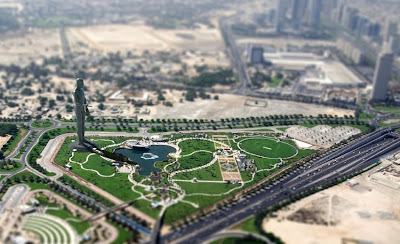 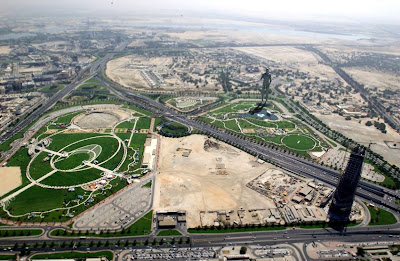 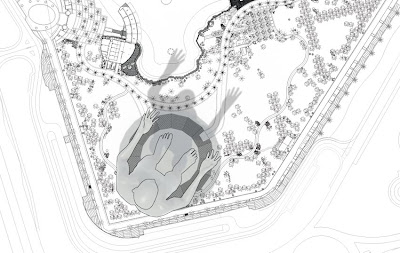 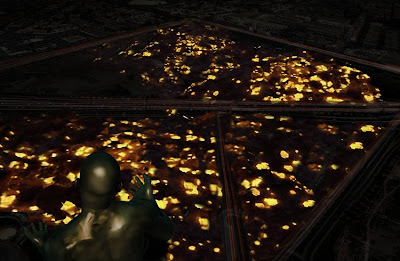 The Statue
A pedestal, that contains a children’s library and
exhibition areas that can be divided into smaller units, is the base of the statue.
The walls in the base are stairs on the outside which leads to the platform where the storyteller begins to rise. Windows punctuates various stairs for a bright indoor environment without any direct sunlight.

The statue can move its arms and hands, tilt its head slightly, open and shut its eyes and mouth. The statue has also big rooms inside of it for reading,
relaxing and other social activities. Each big room has its own theme, may it be a gold room, a crystal cavern, a green room or a room full of fish tanks, or why not just the splendid night views of Dubai.
These rooms are mood setters and they can also be used as theater/storytelling rooms.
Each big room has also a small additional room adjacent to it, for technical purposes, storing, changing rooms and such.
Tourists will find exhibitions about the city in the pedestal and have great views of Dubai from the
statue, as well as guided tours where people can sit in the storytellers hands and having a sweeping
panorama of the city accompanied with explanations.
Transparent railings are hidden in his hands that can be elevated in tour mode. 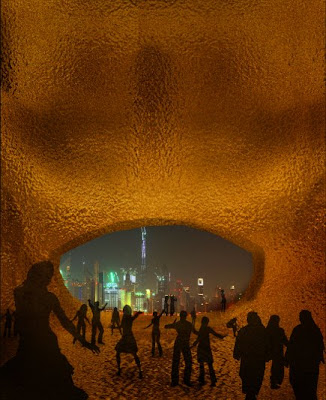 Golden nightclub inside the statues head

Technical aspects
The statue can move its arms and head; this demands an articulate joint between the elevators and the floors on these critical points. The joints are similar in function to those seen in joint buses, and will guarantee an uninterrupted movement inside of the statue, even if he slightly tilts his head.
The arms and head movement is controlled by computers and can mimic a prerecording of an actor for example.
The rigid parts of the statue are made out of a steel frame structure with a cover of sheets of steel. The movable parts must be flexible, thus a material like rubber or silicon with a coating that mimic the glossiness of the steel is preferable.
The speakers in the park can use a flexible frequency method, meaning that the distance the sound travels can be controlled, allowing intense hotspots of sound.
During storytelling evenings and festivals these hotspots may be expanded by changing the frequency and during daytime a shorter range can be used. 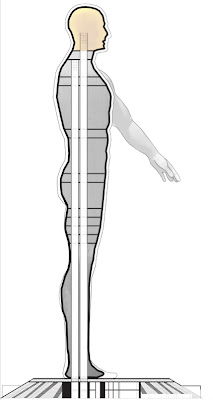 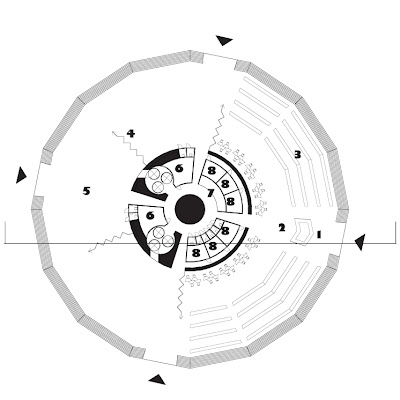 Special thanks to Andrés Morelli for renderings of the statue, see some of his work at: http://www.andresmorelli.com/
Upplagd av visiondivision kl. 3:45 PM