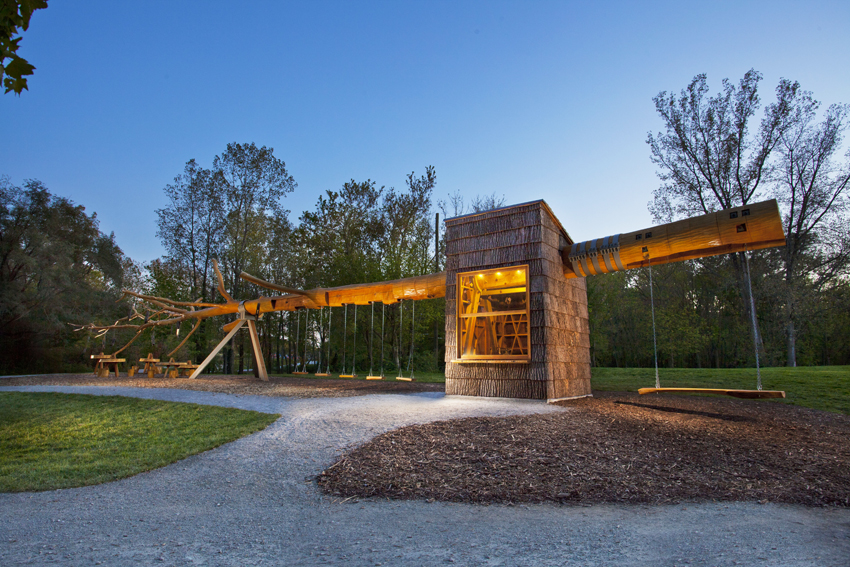 Visiondivision was commissioned by the Indianapolis Museum of Art to create an innovative concession stand for the 100 Acres: The Virginia B. Fairbanks Art & Nature Park.

The raw material we selected is a 100-foot yellow poplar tree, the state tree of Indiana, known for its beauty, respectable size, and good properties as hardwood. We found a great specimen standing in a patch of forest outside of Anderson, Indiana. Our goal was to make the best out of this specific poplar tree, from taking it down and through the whole process of transforming it into a useful building that is now part of one of the finest art parks in the United States. As the project proceeded, we continued to be surprised by all of the marvelous features that where revealed in refining a tree into a building; both in the level of craftsmanship and knowledge of woodworkers and arborists, and also of the tree itself. 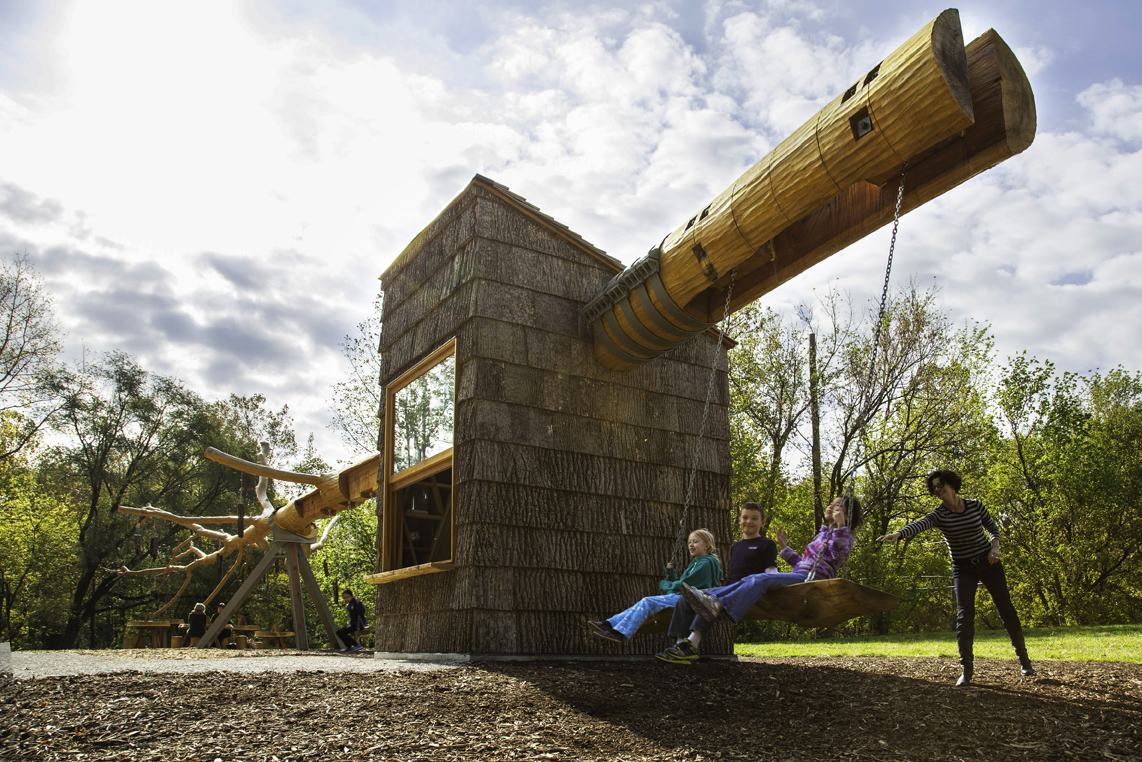 The tree was then transported to the park site, where it became the suspended horizontal beam of this new structure, which is almost entirely made out of the tree itself. The tree’s bark was removed to prevent it from falling on bystanders, a process that occurs naturally as the moisture content in the wood drops, causing the tree to shrink and the bark to lose its grip. Craftsmen loosen entire cylinders of bark from the trunk that are then flattened and cut into a standard shingle length. The shingles was carefully stacked and placed under pressure to avoid curling. The stacks was then kiln dried to the proper moisture content, sterilized, and kept in climate-controlled storage until they where ready for use. Bark shingles are very durable, long lasting (up to 80 years), and maintenance free.

After debarking, pieces of wood are extracted from the suspended tree and used for each of the components of the concession stand; structural support of the construction, pillars and studs for the kiosk, swings under the tree for kids, chairs and tables to be placed under the tree’s crown, from which special fixtures made out of bark pieces will hang. Many school children visit 100 Acres, and we had those kids in mind when we decided to hang swings from the tree. On a smaller scale, we explored ways to use other parts of the tree in the concession stand, including pressed leaves and flowers that were taken from the tree and that became ornaments in the front glass of the kiosk.
We also made Yellow Poplar syrup that was extracted from the bark of the tree and that will be sold in the kiosk, thus meaning that you could actually eat a part of the building. 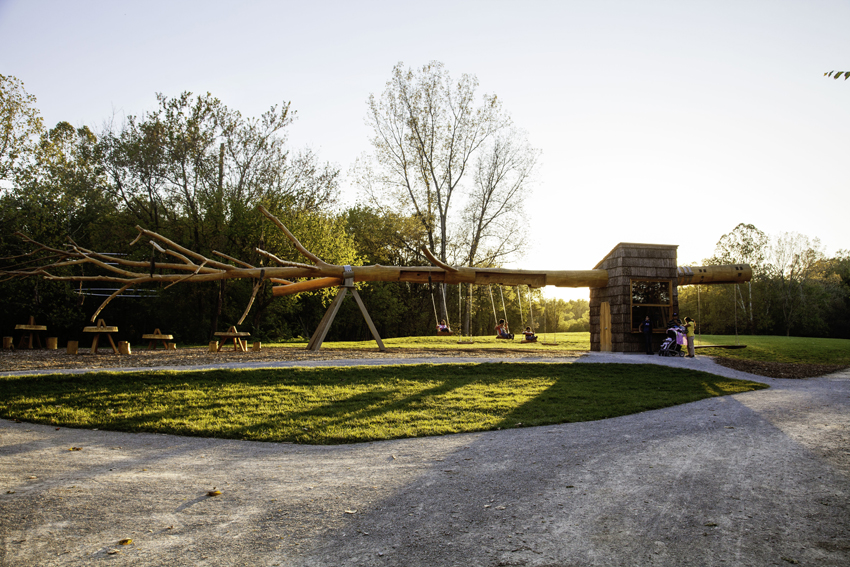 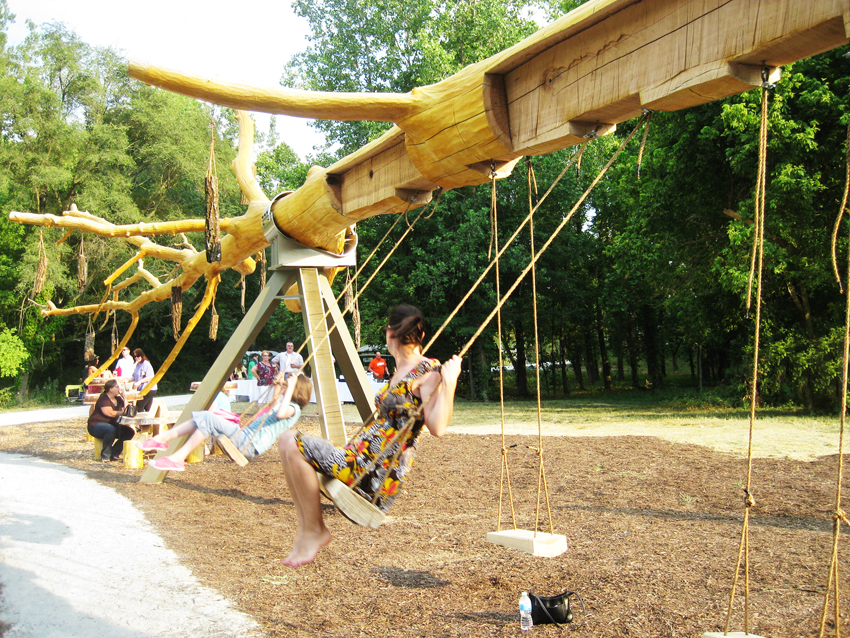 Swings made by pieces of the trunk 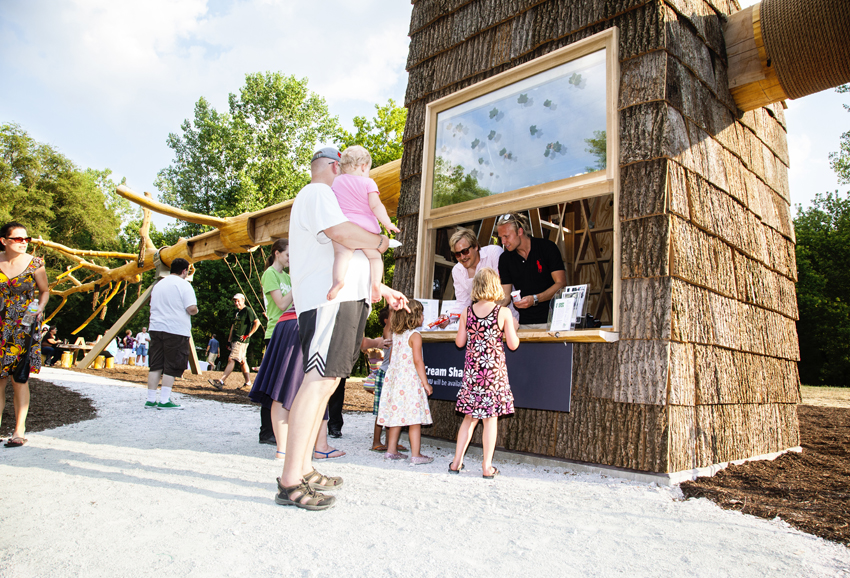 The VD-team handing out ice cream at the opening party 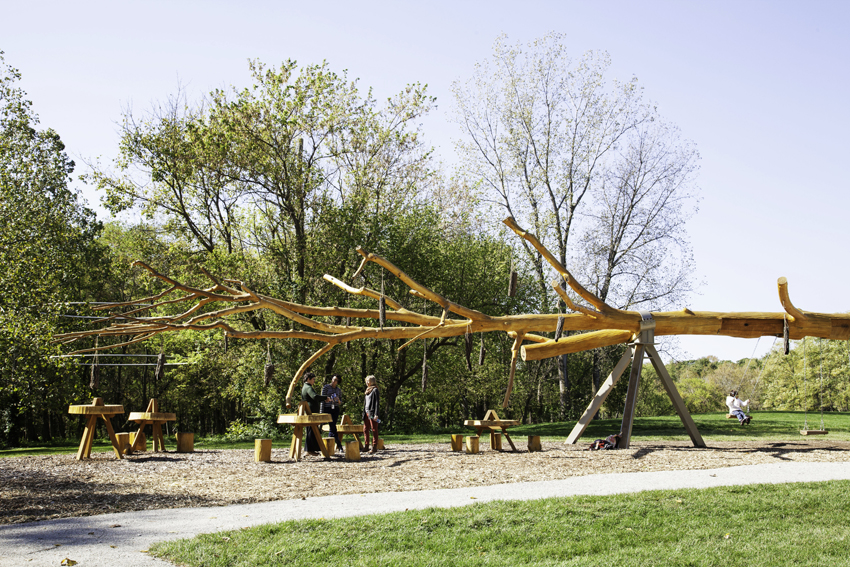 The top part of the tree with tables and chairs 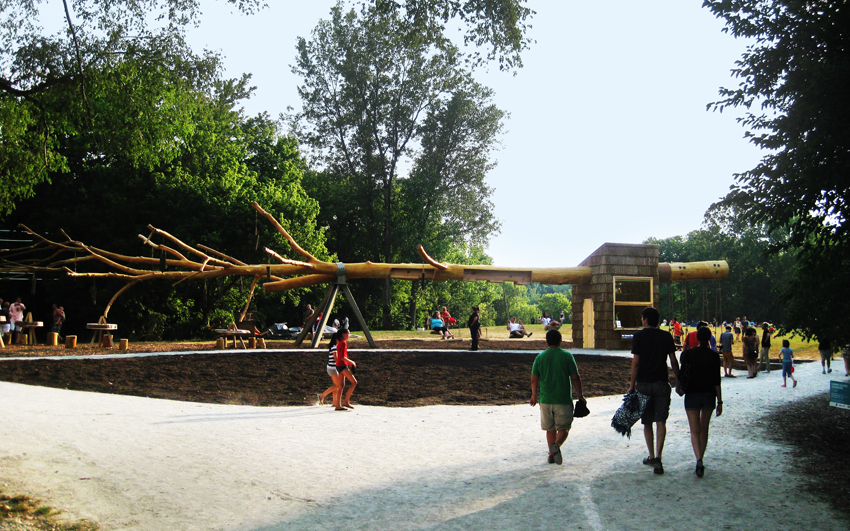 Chop Stick on a summer afternoon 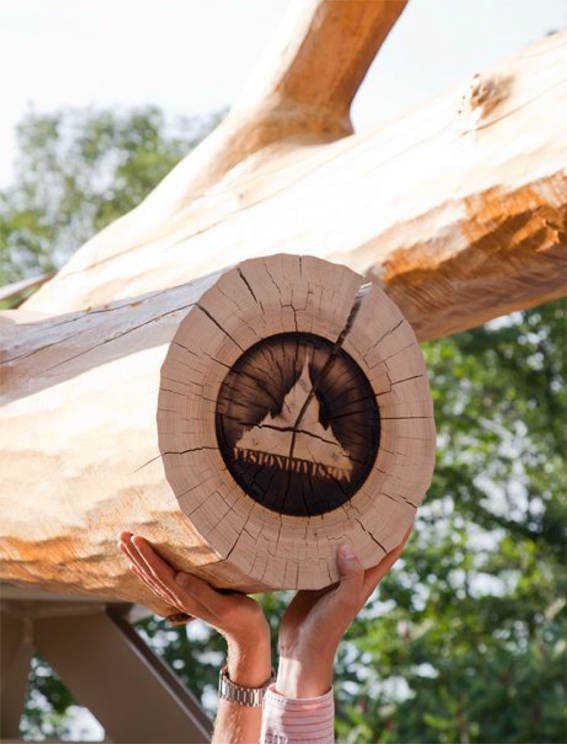 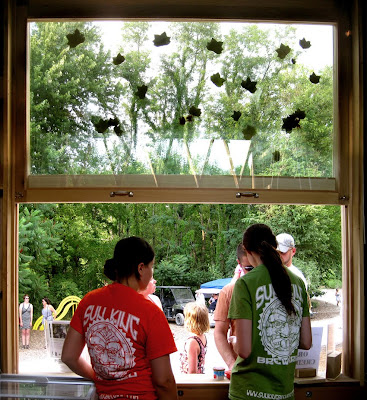 From inside the kiosk 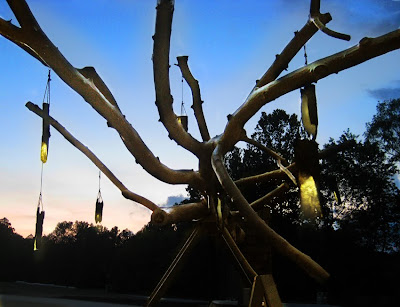 The delicate balance act of the risk of weakening the hovering tree with taking cuts from it versus having to have a certain amount of wood to stabilize and construct the kiosk and carrying the load from the tree itself was very challenging.
Many days was spent with the structural engineer trying different types of cuts in a computer model to optimize the structure. To be able to fit all pieces that needed to be taken from the tree into the actual cuts we needed to make drawings for every single piece taken from the tree. We also needed to optimize the kiosk both in size and in its constructions since it would take a lot of weight from the hovering trunk. The kiosk got a truss frame construction with two larger pieces of wood that are right under the tree. Using the schematics from our engineers force diagram program, we concluded that the wall closer to the end of the tree was taking more load, thus we sized up the two larger pieces of wood in that specific wall. All these alterations really just made the project more beautiful since the design became more refined in terms of more balanced proportions. 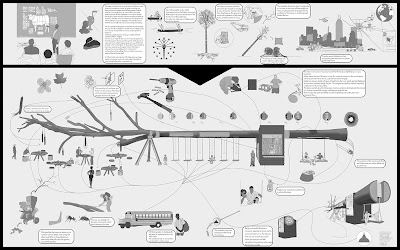 Master diagram showing the concept and the process 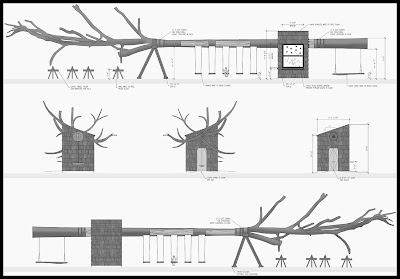 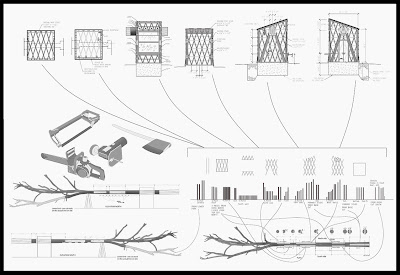 The cut down of the tree and the transportation to the IMA
Image courtesy: Donna Sink
Here is a movie and series of pictures when the tree was taken down gently from a forest outside of Anderson, Indiana and taken to the 100 Acres at The Indianapolis Museum of Arts. 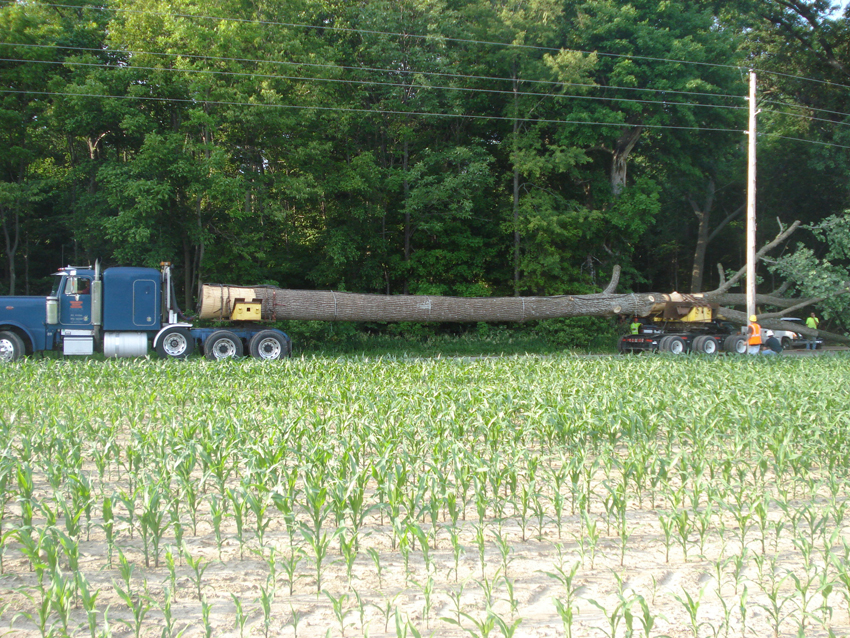 The transportation to the museum 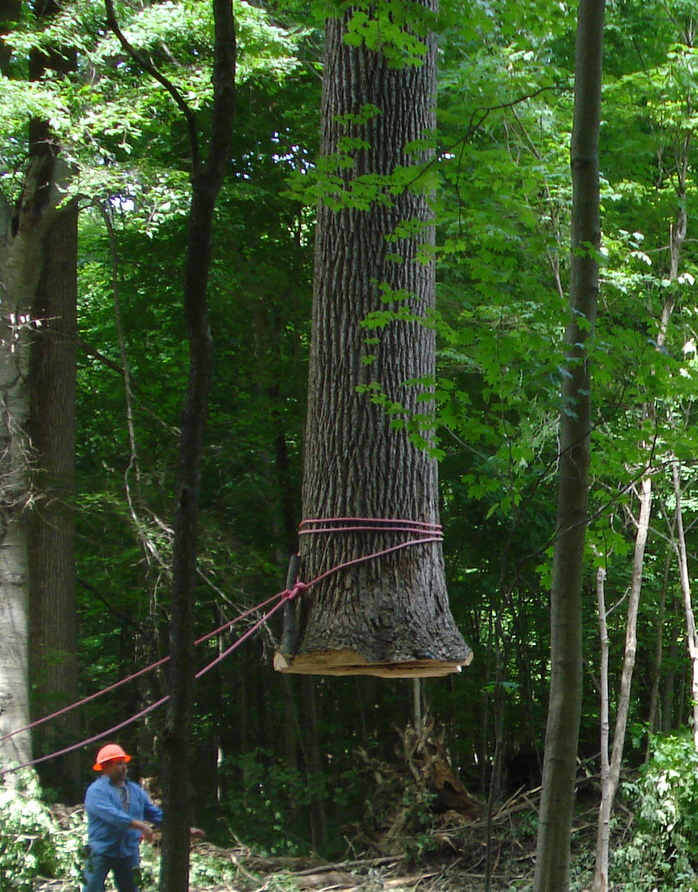 The tree gets lifted with crane

I can only criticize the killing of the tree, because the idea and the final result are amazing. I study all new concepts of architecture and I am permanently discovering new Wonders, last year I traveled to Buenos Aires to a conference and I stayed in a perfect rent apartments in buenos aires, after that I went to Brazilia and I understood why Niemeyer is so loved in Brazil, they buildings are completely overwhelming. Now I advice my colleges and students to travel more, to travel outside the traditional western world to discover what 3rd world has created, since they have as many brilliant architects are we do and we can learn a lot about them, as they actually do nowadays about our work.