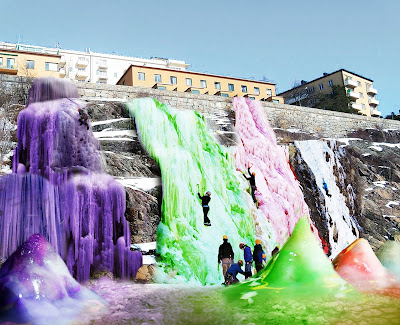 Together with the architect and the ice climber Alexander Ståhl we initiated the idea to create a series of spectacular ice falls for a temporary ice climbing festival that we imagined would take place each winter in Stockholm. The location would primarily be on the cliffs of Fredhäll, which is situated on the southwestern parts of the city district Kungsholmen and slopes towards the water. The area is a very popular area in the summer but that only sees occasional visits during the winter. Being a city that lies on the same latitude as the southern peak of Greenland means that the winters sometimes can be long and harsh, and where snowfall and ice often just means problems for the traffic. We wanted to explore the possibilities of what could be done in the public space during this season and where we could take advantage of the cold weather and making something that you can look forward to each year. 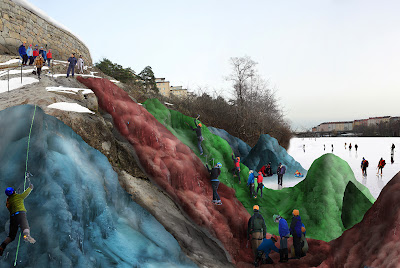 By investigating the natural slopes of Fredhäll we soon saw some possible ice falls with different degrees of difficulty that would attract beginners as well as more experienced climbers. To show the different levels we decided to dye the ice with natural colors, like beetroot or blueberries for example. This would also create a beautiful spectrum of glitzing colors for the people walking by.

During winter it is often possible to ice skate around Kungsholmen and for those people we imagine that we also could create wind shelters in colored ice that also could be used by the climbers.
During a couple of days during this winter we laid the foundation to a medium-advanced slope. We cooked and mashed 60 kilos of beetroots which we later diluted with water from a hole we made in the ice near the cliffs, which we then carried in buckets to various sections of the falls and poured it over the cliffs.
During our investigations we quickly understood that if we wanted to achieve a thick crust of ice that was going to be suitable for ice climbing, we had to have a greater and easier way to access water , which we now are working on so that we will be fully prepared for next winter, which hopefully will be colder than this one. 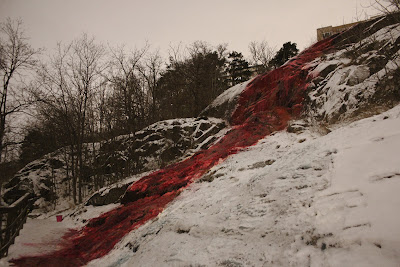 We assume that the falls and these shelters would be operational for a couple of freezing weeks every year and that they also could be lit up during the night since it gets dark so early at this time. The ice climbing event has a great potential to grow larger for each year, hopefully covering the cliffs entirely in a spectacular glowing rainbow of ice. 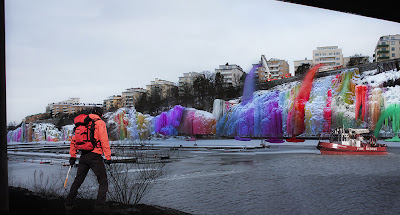 Glad to read your post :). It is very informative!

Very value able post, I read the whole story when I start reading it.

I appreciate your blog post, beautifully expressed and well written.

A very good resource for everybody that wants to read a good blog.Your blog was absolutely fantastic! Great deal of great information and this can be useful some or maybe the other way. Keep updating your blog, anticipating to get more detailed contents.
catalonia villa rental